Constellation of the Month - Gemini 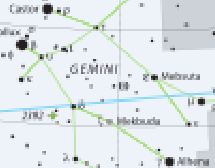 Feb. 2013 Constellation of the Month – Gemini


January and February are probably the best time of the year for stargazing in the Northern Hemisphere.  Several prominent constellations with the brightest stars are near the center of the sky. Orion, Taurus, Auriga, Canis Major, Canis Minor, and Gemini all have 1st magnitude, or brighter, stars.

Castor, the one to the Northeast, is a fascinating multiple star.  Through a small telescope at high magnification, it appears as two stars of 2nd and 3rd magnitude.  These orbit each other, and there is a third, much fainter, star which orbits them.  But that's not the end of the story.  Each of these three stars is a double star, so Castor is actually comprised of 6 separate stars.

There is a star cluster, M35, at the feet of Gemini.  It be easily seen with binoculars.  Gemini also contains a planetary nebula, NGC 2392, also known as the Eskimo Nebula or the Clown-Face Nebula.  Planetary nebulae are roughly circular clouds of hot gases which are expelled by dying stars or ones that have exploded into supernovas.  These gases are, in part, comprised of heavier elements that had been created by nuclear fusion in the stars – such as carbon, oxygen, nitrogen, and phosphorus.  These and other higher elements in our bodies were originally created and expelled by such a star that has come and gone, leaving its remnants to form a cloud from which our Sun and earth coalesced some 4 or 5 billion years ago.
Posted by The Discovery Center at 11:20 AM