Jan 2013 Constellation of the Month – Auriga 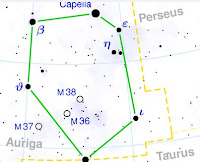 Like so many other stars, Capella is a multiple star. It is comprised of 4 stars, made up of 2 binary pairs which orbit around each other.  One is a pair of bright yellow stars in the same category (G) as our Sun.  They are each 10 times as large as the Sun.  This may be because they are expanding on their way to becoming Red Giant stars, which is near the final stage of the life of stars like the Sun.  The other two are red dwarf stars.  These are small-mass stars which are relatively cool.  Red stars – like red flames on earth are cooler than yellow stars like the Sun, which are, in turn, cooler than blue or white stars.  Being of lower mass and cooler than other stars, they evolve more slowly and live longer than massive blue or white stars.

Points of interest in Auriga include two eclipsing variable stars.  These appear to vary in brightness when viewed from the earth, because the two stars appear either side-by-side or one in front of the other.  Other variable stars actually change their brightness by expanding and contracting.  Auriga is also home to 3 bright open star clusters – M36, M37, and M 38.  They can all be seen in one field of view with wide-angle binoculars.

Posted by The Discovery Center at 5:14 PM