Wednesday, February 2 is Groundhog Day. According to folklore, it is the day when the groundhog, turned meteorologist, determines if spring will come early. If he see his shadow, it will be 6 more weeks of winter. If instead the day is cloudy, he will declare an early end to the winter season. This traditon originated in Europe where the badger or bear was the star. The Germans who settled in Pennsylvania brought it over, Americanizing it by using the common groundhog or woodchuck. So it is no surprise that the media focuses on a Pennsylvania groundhog, Punxsultawney Phil (photo), as its official prognosticator. According to his web-site he has made 125 predictions and they were all right. Now we have a storm dedicated to the little seer - The Groundhog Day Storm of 2011 described by weather.com as a "multi-day dangerous, destructive winter storm". Will Phil need a shovel to liberate himself from his burrow and more than mear fur as protection once he emerges? Or will his eyes water from the blazing sunlight? We'll have to wait till about 7:35AM Wednesday for the offical announcement which will be web casted on www.visitpa.com/groundhog-day starting at 6:30AM.
Posted by The Discovery Center at 4:59 PM No comments: 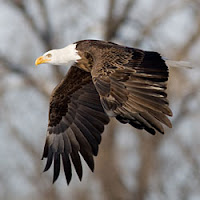 Haliaeetus leucocephalus is the scientific name for America’s National Bird. It means a sea (halo) eagle (aeetos) with a white (leukos) head (cephalus). At one time, bald meant white not hairless. It is called a sea eagle because of its preference for eating fish although it does eat carrion, smaller birds and rodents. Eagles differ from other birds of prey mainly by their larger size, more powerful build and heavier head and beak. The average adult bald eagle measures approximately 3 feet in length (males are smaller); females have a wingspan of 7 feet while males average 6 feet. Although they only weigh 8-9 lbs (male) 10-14 lbs (female), they can lift about 4 pounds. They live for 20 – 30 years. Eagles mate for life and an established pair may use the same nest for many years. They lay 1-3 eggs. Their chicks fledge in about 20 weeks but don’t reach sexual maturity and their full adult plumage for 4 – 5 years. The Bald Eagle is native only to North America. This is one of the reasons, along with its majestic beauty, great strength, and long life that it was chosen as our National Emblem on June 20, 1782. Second runner up was the American Turkey.
Posted by The Discovery Center at 2:36 PM No comments: 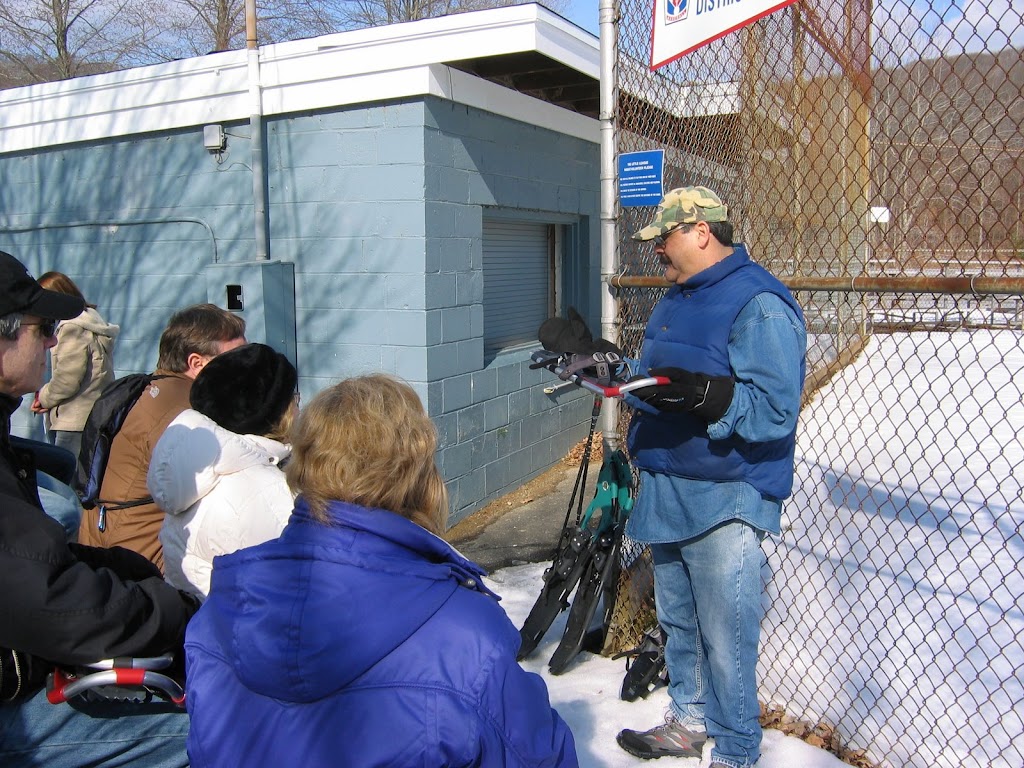 On Jan 23, we held our first snowshoe clinic. Fifteen people came by to try their hand at this easy sport. One attendee, Travily included the experience on her family's blog. Click here to read about it and get an idea of how the clinic works and even take a 10 second virtual hike. Our next clinic is on Feb. 13.
Posted by The Discovery Center at 4:27 PM No comments:

Some visitors to our winter bird feeders are permanent residents. Birds like the blue jay, chickadee, and tufted titmouse live and breed locally merely moving about from one food source to another. Others have migrated into our area for a variety of reasons. The most common reasons are to take advantage of a good food supply and better shelter. Our regular winter visiting songbirds, like the junco (photo) and white-throat sparrow, find our area has a good supply of the seeds and nuts and provides a safer environment then the more northern regions where they spend the summer. Generally the snow is not as deep or long lasting. More importantly, the days are longer allowing them more daylight to feed. Most songbirds have a weak sense of smell and rely on their eyes for finding food. Some of our winter birds only visit us occasionally. Pine siskins, evening grosbeaks and redpolls make their homes in the northern coniferous forest. If there is a poor northern seed crop, they will move further south into our region in search of food. Some years they flock to our feeders, while in other years, they are nowhere in sight. What all our winter songbirds have in common is the ability to eat seeds and nuts. Most of the songbirds that mainly depend on insects or nectar left our area in the fall for better feeding grounds.

Posted by The Discovery Center at 7:13 PM No comments:

The Women's Hiking Group will hike at Bennetts Pond on Jan 11th and 13th.
Posted by The Discovery Center at 5:19 AM No comments:

A Great Day to Be Outside 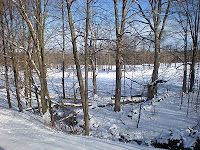 What a wonderful day for enjoying the outside. The recent snowfall has been cleaned up and now it is time to go out and enjoy this “splendiferous” day. The Ridegbury section of Ridgefield received 11.5 inches Friday. So, the Ridgefield Public Golf Course is in great shape for sledding, x-country skiing, snowshoeing, or just hiking. If you don’t want to break trail, no problem, as there has already been quite a few adventures out there already. Take the dog along with you as there is an abundance of wildlife tracks to sniff out. Our resident fox has made his daily rounds. The deer have cleared areas in their quest for acorns and grass. The sun is out and the temperature is a balmy 26º. Ridgefield is brimming with open space, so go out and enjoy at least one. Then you can justify kicking back and enjoying a cup of rich hot chocolate with whipped cream on top. (Picture is writer's view of the Ridgefield Golf Course)

Posted by The Discovery Center at 7:49 AM No comments: 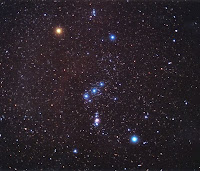 The constellation Orion location makes it visible from all the inhabited parts of Earth. Consequentially, nearly all cultures had some type of myth or legend related to it. Usually it has been associated with a hunter, warrior or some heroic male figure. However being dominate during the northern hemisphere winter, it was frequently associated with storms. Some of these earliest storm legends started with the Babylonians. The Romans referred to Orion as the “bringer of clouds” or the stormy one”. During the first Punic war (264BC-241BC) the destruction of a Roman fleet was attributed to the fact that it set sail with Orion rising – thus “the stormy one” sent a devastating storm.

The sky was man’s earliest calendar. Combining myths with the stars made it easier to remember which stars represented which season. The Navajo called it “The First Slender One”. When it set at dusk, in May, they planted their crops. The Aztecs called it the "Fire Drill" as it marked the start of the New Fire Ceremony which postponed the end of the world (winter solstice). In Southern hemisphere, the belt is referred to as the “Three Kings”, “The Sisters” or “Three Mary’s”. Its appearance marks the beginning of the Christmas season.

The Egyptians associated it with the Osiris, the god of rebirth and the underworld. When a pharaoh died he was transformed into a god in the sky. The Giza Pyramids mirror the pattern of Orion and the air shaft in the Great Pyramid King’s chamber was aligned with the star Alnitak within it – thus providing the king a direct pathway to heaven. (Photo credit: Matthew Spinelli -http://apod.nasa.gov/apod/ap030207.html)

Posted by The Discovery Center at 8:38 AM No comments:

The DC Women's Hiking Group will hike at Florida Refuge this week.
Jan. 4th and 6th.
From Route 7 take Florida Hill Rd. up to North Valley Rd. on right hand side.
Park on side of road near Florida Hill Rd.
Posted by The Discovery Center at 5:31 AM No comments: