The DC Women's Hiking Group will hike at Tarrywile Park in Danbury on Tues., Jan. 24th and Thurs., Jan 26th.
From I-84 take the airport exit.
At end of ramp turn right.
Follow through traffic lights and at stop sign turn onto Southern Blvd. ( It will be a sharp right turn).
Follow small brown signs for Tarrywile Park.
The park will be on the right, across from Immaculate H.S.
Meet in lower parking lot at 8:30am.
Posted by m at 8:33 AM No comments: 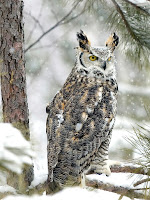 The Great Horned Owl is the most powerful and largest of the North American owls.  Its wingspan is 4-5’ from tip to tip with the females being larger than the males.  It is named after the feather tufts resembling horns on its head which are often mistaken for ears.  Its real ears are covered by special feathers located behind the facial dish feathers.  These allow it to hear the slightest sound up to 900 feet away.  A fierce predator, it has the most diverse diet of all the owls.  This ranges from large raptors including other horned owls, to insects.  It is one of the few animals that will eat skunks.  It mainly hunts by watching and waiting on a perch.  When its prey passes, it will quietly swoop down, extend its 4X8” talons and apply a grip onto its victim that can range up to 28 pounds.  This usually severs its spine.  They start nesting in January by lining an abandoned nest with feathers.  Usually the female incubates the 1 – 4 eggs for 30 – 37 days while her mate brings her food.  Six weeks after hatching, the owlets will explore the nest area and by 9 weeks they can fly.  Their parents will continue to feed and care for the fledglings for months, often as late as October.  Great Horned owls take life-long mates and together vigorously defend their territories especially in the winter and fall when the young are most vulnerable.  They are considered nocturnal with most of their activity being at dusk and just before dawn.  However when food is short, especially in the winter, they will continue to hunt during the daylight hours.  Known to live up to 28 years, this bird is the symbol of wisdom and good luck to all that see it. (Photo:  NH Fish & Game)
Posted by The Discovery Center at 3:10 PM 1 comment: 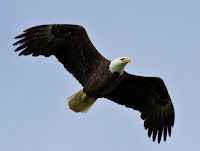 Haliaeetus leucocephalus is the scientific name for America’s National Bird. It means a sea (halo) eagle (aeetos) with a white (leukos) head (cephalus). At one time, bald meant white not hairless. It is called a sea eagle because of its preference for eating fish although it does eat carrion, smaller birds and rodents. Eagles differ from other birds of prey mainly by their larger size, more powerful build and heavier head and beak. The average adult bald eagle measures approximately 3 feet in length (males are smaller); females have a wingspan of 7 feet while males average 6 feet. Although they only weigh 8-9 lbs (male) 10-14 lbs (female), they can lift about 4 pounds. They live for 20 – 30 years. Eagles mate for life and an established pair may use the same nest for many years. They lay 1-3 eggs. Their chicks fledge in about 20 weeks but don’t reach sexual maturity and their full adult plumage for 4 – 5 years. The Bald Eagle is native only to North America. This is one of the reasons, along with its majestic beauty, great strength, and long life that it was chosen as our National Emblem on June 20, 1782. Second runner up was the American Turkey. (Blog originally published 1/22/11)
Posted by The Discovery Center at 9:49 AM No comments: