From I-84 take the airport exit.
At end of ramp turn right.
Follow through traffic lights and at stop sign turn onto Southern Blvd. ( It will be a sharp right turn).
Follow small brown signs for Tarrywile Park.
The park will be on the right, across from Immaculate H.S.
Meet in lower parking lot at 8:30am.
Posted by The Discovery Center at 6:56 PM No comments:

Take Rt. 35 to the traffic light at Limestone Rd.
Turn left on to Limestone Rd.
Follow Limestone, it will turn into Bennetts Farm Rd.
Follow Bennetts Farm Rd. and turn right on to South Shore Dr.
Ridgebury Elementary School will be on the left right before the turn to South Shore Dr.
Turn left into baseball field and parking area.
Meet at 8:30am.
Posted by The Discovery Center at 12:56 PM No comments:

Take Ridgebury Rd. turns into Saw Mill Rd.
Past light to go on 84.
At next light take left onto Mill Plain Rd
Take 1st right almost immediately after.
There is a small sign.
Follow road to parking area.
Meet at 8:30am.
Posted by The Discovery Center at 11:46 AM No comments: 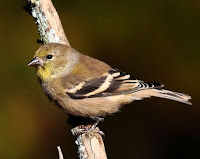 There is nothing better on a cool early September morning than to grab a pair of binoculars, a cup of hot coffee and head outside to go looking for birds!  An American Robin greeted us in the parking lot at Bennett’s Pond while we assembled and got a quick lesson from Lars on how to most effectively use binoculars.  We followed the trail up the hill to the meadow area, which used to be the site of Louis D. Conley’s mansion and farm called Outpost Farm.  Although the house and outbuildings are long gone, many beautiful trees from Conley’s tree nursery, a booming business in the 1920s, still remain scattered throughout the park.  Once again we found that the warm sunny spots attract the birds, and the best viewing is with the sun behind your back.  We watched an American Goldfinch fly into the weedy field, perhaps looking for thistle seeds to feed on.  The goldfinches are molting and putting on their drab winter plumage, losing their bright yellow and black coloration and becoming more brown and olive (pictured above).  Large noisy birds, such as the Blue Jay, American Crow, and Gray Catbird announced themselves with their loud raucous calls well before we could see them.  Other easy to recognize bird calls are from the Tufted Titmouse with its peter-peter-peter and the Black-Capped Chickadee with its fee-dee call.  Another bird spotted along the forest edge was a female Eastern Towhee, with its dark brown head, chest and back, rufous sides and white belly.  It was perched on a low tree, but is often found scratching and rummaging in the undergrowth for insects, fruits and seeds.  We learned the different approaches that tree clinging birds take to trees.  The White-Breasted Nuthatch often starts at the top of the tree and works its way down looking for insects and seeds, while the Downy Woodpecker starts low and works its way up the trunk, poking around for insects crawling along or under the bark.  Titmice and chickadees are often found with nuthatches and downy woodpeckers in winter foraging flocks, as food is easier to find as a group and there are more eyes to alert the flock to predators, and more bodies to confuse them in flight.  A good morning walk among the birds was had by all!  Photo credit: www.allaboutbirds.org
Posted by The Discovery Center at 1:16 PM No comments: