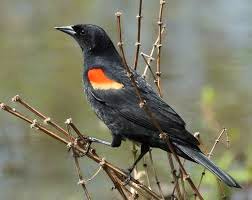 We all agreed that even though spring seemed about two weeks behind this year due to a long winter, it was nevertheless progressing and the birds were slowly returning. In the parking lot we got a good view of a red-bellied woodpecker after following its distinctively loud and shrill “kwirr” call. We saw many of what Noah calls the “usual suspects” in the fields and woodlands at Bennett’s Pond, like black-capped chickadees, American robins, Eastern bluebirds, common crows, turkey vultures, blue jays, (was it a red or white-chested?) nuthatch, and what we called an “LBB” or “little brown bird,” but was probably a song sparrow.  For early returning migrants, we saw both red-winged blackbirds (picture - spotted last month at the Garden of Ideas), as well as the Eastern phoebe, a brownish-grey and white flycatcher that is familiar to many for its raspy “phoebe” call. We especially enjoyed seeing the waterfowl on the pond, such as pairs of shy wood ducks that took off when we got too close, mallards, ring-necked ducks (also seen last month) and the graceful mute swans.  Wood ducks are magnificent birds, with iridescent green crested heads with white stripes on the males and a chestnut breast.  The female wood ducks are rather fancy too, with their grey-brown coloring, crested head and white eye rings.  The wood ducks live in wooded swamps and nest in tree holes, taking advantage of nesting boxes like the ones we saw placed in the shallow water at Bennett’s Pond.  And perching on and flying out of those nesting boxes were tree swallows, looking more iridescent blue than green in the morning light.  We watched a bunch of these brilliant aerialists catching insects at the western edge of the pond, swooping gracefully with their long pointed wings and notched tails. Also perched on logs and grassy hummocks in the pond were numerous painted turtles soaking up the sun, an extra bonus although outside of the bird category. After receiving a tip from a fellow bird watcher, Noah was further rewarded for his perseverance by seeing some hooded mergansers in breeding plumage at one end of the pond after the rest of us left, and some palm warblers, the first returning warblers he had seen this year.  This rusty-capped small song bird has an unusual habit of wagging its tail, exposing the yellow underneath.  Spring is indeed unfolding right before our very eyes!
Posted by The Discovery Center at 3:57 PM No comments:

From I-84 take the airport exit.
At end of ramp turn right.
Follow through traffic lights and at stop sign turn onto Southern Blvd. ( It will be a sharp right turn).
Follow small brown signs for Tarrywile Park.
The park will be on the right, across from Immaculate H.S.
Meet in lower parking lot at 8:30am.
Posted by The Discovery Center at 5:23 PM No comments:

The DC Women's Hiking Group will meet at Topstone Park in Redding on Tues., April 7th and Thurs., April 9th.

Take Topstone Rd. off of Rt. 7.
Follow road over RR tracks until it becomes a dirt road.
Shortly after, a parking area will be on the right side of the road.
Meet at 8:30am.
Posted by The Discovery Center at 4:53 PM No comments:

It was not exactly spring-like, as there was a fresh five inches of snow on the ground with big flakes still falling, but a large group of all ages set off early in the morning to find avian signs of spring at the Garden of Ideas on North Salem Road.  Bird song filled the air, mostly from the red-winged blackbirds, one of the earliest spring migrants to fly up from the southern states.  The males, with their black bodies and yellow and red shoulder badges, were easy to spot in the area around the marsh.  Noah taught us to listen for the common grackle, another early migrant that often comes up in large flocks that include other birds such as the red-winged blackbirds, brown-headed cowbirds, European starlings, and even American robins.  A red-tailed hawk sat all puffed up on a tree limb surveying the area, and was unperturbed by the audience observing from below.  Birds fluff up their feathers in the cold to trap air between them for better insulation, and the oils on the feathers provide waterproofing.  A member of the buteo genus, the red-tailed hawk preys mostly upon rodents, and is one of the most common hawks found in our area, staying year-round.   Perched in another tree was another year-round inhabitant, the mourning dove, whose graceful silhouette with a rather small head and long tapering tail, and its mournful call, make it easy to identify.  As we crossed the boardwalk over the marsh, we found a pair of rather shy ring-necked ducks that were swimming near the reeds.  The male ring-necked is beautifully marked in black, grey and white, while the female is brown with a darker crown above a paler face.  Both have a peaked head and a distinctive white ring on their bills, which looks a bit like a “mustache” from a distance.  In fact, the ring around its neck for which it is named is rather hard to see, so it is much easier to go by the other features to identify it.  Even though they are one of the ducks that dive for their food, they often frequent shallow ponds, lakes and marshes.  Mallards were also spotted, one of our most familiar and easily identified ducks with the iridescent green heads and yellow bills on the males.  They are “dabbling ducks,” as they feed by tipping forward to eat water plants and hardly ever dive.  Woodpeckers were heard in the distance, both the “wuk” sound of the pileated and the “kwirr” call of the red-bellied woodpecker.  Also in the back of the Garden of Ideas property are some domesticated birds: about a half dozen hens and a rooster.  We were interested to learn that Joe Keller’s chickens stay outside in their coop year round, and stop laying eggs for only about six weeks of the year.  Joe plans to fence in a larger area for them to roam in the spring, so they won’t fall prey to fox and other predators.  We all agreed it was a beautiful day of birding despite the snow! Picture:  Ring-necked ducks Credit:  Chris Burke
Posted by The Discovery Center at 1:56 PM No comments: 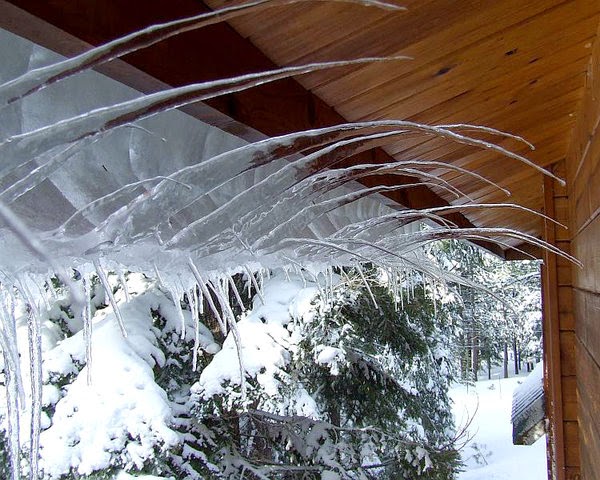 Did you know they were doing serious research on icicles?  Knowing their properties is important for among other things gutter design.  Here is an excerpt from The Icicle Atlas by Dr. Stephen Morris of the University of Toronto:
“Icicles are familiar to anyone living in a cold climate. But what determines their shape and growth? Their distinctive forms emerge from the complex interplay between their evolving shape and the flow of air and water over their surfaces. These flows in turn control the release of heat needed to transform water into ice. Impurities in the water also play an important role, especially in the formation of ribs or ripples around the circumference of the icicle.”
Thus, icicles do not form from water tension and are dependent on air flow and water impurities.  The Atlas can be found on-line at:  http://www.physics.utoronto.ca/Icicle_Atlas/  It has some very interesting pictures and details growing conditions.  So before you knock down the treasure trove that has been decorating your house, have a look to see if they match Dr. Morris’ collection.  (Picture: Naturally curved icicles on the edge of a roof in Truckee, CA.  The icicles kept growing and curled as a mass of icy snow slid down the metal roof.  Credit John Larkin - NYTimes Science)
Posted by The Discovery Center at 8:08 AM No comments: