The DC Women's Hiking Group will hike Tues., Sept. 4th and Thurs., Sept. 6th at Pine Mountain in Ridgefield.
Take Pine Mountain Rd. to end.
Parking is on the right.
Meet at new time 8:30Am.
Posted by The Discovery Center at 10:11 AM No comments:

Once in a Blue Moon

Once in a Blue Moon" refers to occasional happenings. This Friday, August 31st will be our first Blue Moon since March 2010 and the next one won't be until July 2015.  But why is it called a Blue Moon, when it isn't really blue at all.  Here is a little history behind the saying. A blue moon is the second full moon in a month. In years past, especially before the calendar was standardized, it had another meaning. During a calendar year, usually there are 12 full moons which means 3 full moons in each of the 4 seasons. Occasionally, a calendar year will have 13 full moons. This means one season has an extra full moon. To keep track of time, the moons within a season were referred to a early, mid and late. A 4th moon appearing in a season created a problem. So the 3rd moon in that season was called a blue moon. This allowed the 4th and final moon to still be called the late moon. This extra full moon created additional problems. Monks who kept track of the calendar found this upset the regular arrangement of church festivals. The extra moon was difficult to predict and consequentially its occurrence disrupted a lot of well laid plans. This is one of the reasons the number 13 is considered unlucky. It was an unlucky monk who had to sort out the remaining festivals and rearrange the church schedule. So enjoy its light and be thankful for a standardized calendar. (Photo by Getty image)
Posted by The Discovery Center at 5:47 AM No comments:

School is back in session.
Come join us for our first hike of the new school year!
The Discovery Center's Women's Hiking Group will hike Thursday, August 30th at Pierrepont State Park.
Park in lot off of Barlow Mt. Rd.
Meet at 9:30am.
Posted by The Discovery Center at 4:36 PM No comments:

August 2012 Constellation of the Month - Scorpius 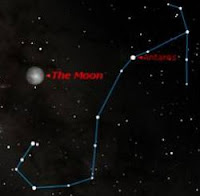 Scorpius, the scorpion, is one of the largest constellations, and one of the most recognizable.  It is low in the South, with the curved tail at the bottom and the head at the top.  You may need to find an elevated viewing spot where the southern horizon is not obscured by trees in order to see the entire constellation.  In Greek mythology, Scorpius killed Orion the Hunter, our March 2012 constellation of the month.

It's brightest star, Antares, is a red supergiant, more than 800 times larger than our Sun.  If it were in our solar system, its surface would extend  beyond Mars.  So, the first 4 planets in our solar system, including Earth, would not exist.  And Jupiter would be much warmer than it is now.,

The open star cluster, M7, is located just beyond the tip of the tail.  It covers an area about twice the size of the Moon; it is best viewed with binoculars.

After the Sun, the next strongest source of X-rays is Scorpius X-1.  It is a binary star (two stars circling each other), in which the intense gravity of one of the stars draws material off the other star.  This material circles the first star in a disk shape and then falls to the surface of the star. The acceleration of the charged particles in the disk causes a tremendous amount of energy to be released as X-rays.
Posted by The Discovery Center at 4:32 PM No comments:

The Perseids Meteor shower has returned! 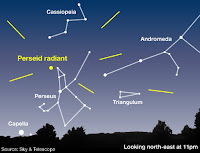 August 11 – 12 is the climax of the annual Perseid meteor shower. But any night this week will provide a good chance of seeing some action - weather permitting of course.    The best time for viewing is after midnight to the predawn hours.  Find  a spot away from a lot of ground lights and look to the northeast.  If there is a lot of ground light, look to the darkest part of the sky.   Like most meteor showers those with patience see the most. The meteors tend to come in batches out the constellation Perseus, hence the name. However, they can appear in any part of the sky but all their tails will point back to Perseus.  Although the moon will be present, this year it will be waning crescent (a sliver that is getting smaller ) so moonlight won't hinder the show.  The Perseids occur every year as the Earth passes through a stream of dust particles and debris from the Comet Swift-Tuttle. These particles hit the earth’s atmosphere at speeds up to 140,000 mph and become heated to form bright streaks across the sky – shooting stars.  The shower is at its peak or climax when the earth passes through the middle of the tail debris.  For those willing to stay up later or get up extra early, there is an added treat.  The moon will be passing the brightest planets Venus and Jupiter in the predawn eastern sky.  So get out a blanket, lay on your back and enjoy the show.  If you would like more information about this event, attend our 8PM program on Sat. Aug 11 at New Pond Farm, West Redding.  Picture from BBC and Sky and Telescope (2011).
Posted by The Discovery Center at 10:03 AM No comments: