The DC Women's Hiking Group will be hiking at Bear Mountain and Candlewood Lake
in Danbury on Tues. Feb. 28th and Thurs. Mar. 1st. Take exit 5 off of
I-84. Follow Rt. 37 North past all the shopping centers. Go past the
commercialized district and eventually past the federal prison into the more
rural part of northern Danbury. About 0.2 mile past the prison entrance, on
the right, is Bear Mountain Road which is 2.8 miles from I-84. Turn right
onto Bear Mountain Road and follow it for 0.5 mile. Turn right into the
entrance of Bear Mountain Reservation.
Meet at 9:30 am.
Posted by The Discovery Center at 4:11 PM No comments:

The Women's Hiking Group will not hike on Tuesday, February 21st.
No School.
The Group will hike Thursday, February 23rd at Seth Low Pierrepont in Ridgefield.
Take Barlow Mountain Road to parking area.
Meet at 9:30am.
Posted by The Discovery Center at 5:34 AM No comments:

Sometime between 31,500 – 32,100 years-ago in the Late Pleistocene, small arctic creatures collected fruit and seeds storing them in soccer ball size underground chambers. These “pantries” were first lined with hay and then animal fur before depositing the fruit and seeds. Some of these burrows became buried in ice deposits along a Siberian River. Under the ice’s pressure, the soil became hard as cement, making the chambers fully isolated from the surface with the frozen ground protecting its valuable contains. Russian scientists have unearthed burrows located 125 feet below the present surface. Their contents had a temperature of -7° that had never thawed. Using the tissues from the immature fruits, they cultivated them in a nutrient rich mixture. Surprisingly small weedy plants appeared. The plants, Silene stenophylla, grow so well they produced lacy white flowers. When fertilized the ancient plants fruited producing viable seeds. This proved that permafrost serves as a natural depository for ancient life forms. It also proved that viable material can survive much longer than thought. Further studies may be able to produce other ancient life and their genetic codes. Silene stenophylla is the oldest plant ever to be resurrected. It looks very similar to a modern version which grows in the same area of northeastern Siberia. This study was made by the Institute of Cell Biophysics of the Russian Academy of Sciences and published on Feb. 20th in the journal Proceedings of the National Academy of Sciences. Photo credit: Yashine et al/PNAS
Posted by The Discovery Center at 3:55 PM No comments: 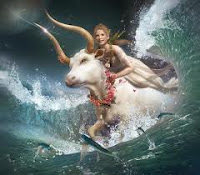 Taurus, The Bull, is one of the oldest constellations with some believing it was observed in ancient Babylonia and others believing that it appears in a 40,000 year old cave painting in Lascaux. Stories about it have followed it throughout history with most referring to fertility and abundance. This could be because for the past 4,000 years it has announced the Vernal (Spring) Equinox. One of the most popular stories goes back to the Greeks. Zeus, the ruler of the Olympian Gods and the God of the Sky, became enamored with beautiful Europa, the daughter of King Agenor. Because she was always protected by her father’s soldiers, Zeus turned himself into a beautiful white bull with a pair of golden horns and wandered toward her while she was picking flowers in a field. Princess Europa, mesmerized by this unusual bull, made him her pet. One day, she decided to ride her favorite pet and jumped onto its back. Immediately, the bull bore her away, swimming across the sea to Crete. There Zeus revealed himself. The story continues with Europa having three sons by Zeus, one being Minos. Minos is credited with creating the Cretan Bull Cult and whose stepson, the Minotaur (half bull, half man) was banished to the labyrinth below his palace. When looking at the constellation, the horns are the dominate feature with the rest of the bull being rather disappointing. It is said this is because the bull was half submerged as it carried Europa across the sea to Crete.

Posted by The Discovery Center at 9:53 AM No comments:

The DC Women's Hiking Group will hike this week Feb. 14th and 16th at Lake Windwing in Ridgefield, CT.
From Rt. 35 take a left onto Limestone Rd.
Follow Limestone as it will turn into Bennetts Farm Rd.
Follow Bennetts Farm Rd. to South Shore Drive which is across from Ridgebury Elementary School.
The entrance and parking lot will be on the left.
Meet at 9:30am.
Posted by The Discovery Center at 3:43 AM No comments:

In China, a 165-million-year-old fossil of a Jurassic era katydid, Archaboilus musicus, was unearthed. Its wings were so well preserved that scientists have been able to analysis them and recreate the sound they produced. The insect was about 4” long with wings about 2.7” long. The male’s wings are designed to be sound generators. One edge had a row of teeth like a file. The other was designed like a scraper. When the wings are closed, the teeth are rubbed against the scraper to produce a sound, which is amplified by the wing membranes. Modern day katydids are designed similarly and use their call to lure a mate. By comparing the wings against 59 modern day katydids, scientists were able to determine they produced a high-frequency tone similar to modern day crickets. To determine how often they sang, scientists compared the fossil to present day Malaysian katydids that are about the same size and live on an island without bats. To avoid bats, most katydids have evolved a lower frequency sound sung at a slower rate. Jurassic katydids did not have to deal with the later evolving bats. From this they theorized that the ancient katydid sang out a few times every second. From these findings and other fossils, the high-frequency calls may go back to the Triassic period 250 – 200 million years ago. This study was published Feb 6, 2012 in the journal Proceedings of the National Academies of Sciences. Live Science web-site has posted this image and the sound. To hear it: Click Here. (Image: Lillian Castano-R & Fernado Monealegre-Z (2012)
Posted by The Discovery Center at 8:22 AM No comments: 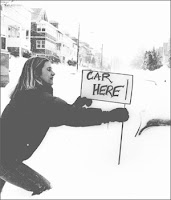 It was Feb 6, 1978. Sport utility vehicles didn’t exist and 4-wheel drive vehicles were an anomaly. The weather man had said we were in for a big storm but the magnitude of it hit hurricane status. It started to snow about noon. By 5pm there was no going home for a lot of folks with cars stranded along highways all over the state. It continued to snow for 30 hours leaving over 2 feet of wind wiped snow behind. Drifts at times would be as high as houses. Eventually, Gov. Ella Grasso literally closed down the state. It took a good three days to dig out, longer for some of us. For those of us who lived through it, it was either a royal pain or a time for pride in our Yankee resourcefulness. As an employee at the AAA of Hartford, the emergency service lines started lighting up and all departments were called in to help. Some of the guys were recruited to stay overnight, sleeping on cots in the basement. The rest were told to go home early. At one point, even road service had to be closed down as the wreckers were bogged down and drivers decided to wait it out. Emergency personal couldn’t get to their stations with police giving nurses and doctors rides that sometime ended up taking hours. For some of us who were lucky enough to have friends that lived close by our job, it was a time to pack it in and sit it out, not realizing it would be 3 days before we could get home. The Blizzard of 1978 came, claimed its place in history, and left behind life long memories.
Posted by The Discovery Center at 10:15 AM No comments:

Feb. Constellation of the Month -- Taurus

In January, we followed the band of the Milky Way from our December constellation to the constellation of Perseus. If we continue in that direction and along the band, we'll see the constellation of Auriga, which is shaped like a non-symmetrical pentagon. Auriga should be almost overhead an hour after sunset in February. Slightly south and west of Auriga, there is a prominent constellation which looks like the diagram to the left -- Taurus, the Bull.

The head of the bull is the triangle shape at the lower middle in the diagram shown here. The brightest star is Aldebaran. Aldebaran is a red giant star, nearing the end of its life; its diameter is 44 times as wide as the Sun. In about 5 billion years, the Sun will cool and expand and become a red giant itself.

The two horns of the Bull are marked by the two stars in the upper left of the diagram. Near the tip of the left horn is M1, the Crab Nebula. It is a cloud of expanding gases which are the aftermath of a star which exploded (a supernova) in the year 1054.

Aldebaran appears to be in the middle of a cluster of stars called "the Hyades", which fills up the triangle of Taurus's head. This is a group of about 200 stars that formed at the same time and which are moving together. Aldebaran is in our line-of-sight to this cluster, but it is much closer.

An even more interesting star cluster is the Pleiades, also known as the 7 Sisters. Somewhat north and west of Aldebaran, they form a uniquely memorable shape of a number of easily visible stars close together. The Subaru logo is taken from the shape of the Pleiades. Some people can see 5 stars with the naked eye, others 7, others more. A telescope will show hundreds of stars surrounded by a nebula -- a vast cloud of interstellar gases and dust. In many nebulae with star clusters, the stars were formed from the nebula. But in this case, they are just passing through each other -- at a speed of about 25,000 miles per hour.
Posted by The Discovery Center at 1:09 PM No comments: