The DC Women's Hiking Group will hike at Saugatuck Falls in Redding, CT on Tues., Nov. 30th and Thurs., Dec. 2nd at 9:30am.
Directions: Take Rt. 7 to Topstone Rd. to the end.
Turn Right onto Umpawaug.
Turn Left onto Diamond Hill.
Follow Diamond Hill and access road will be on the left side between mailbox # 65 and 73.
Parking will be down road by entrance for Saugatuck Falls trail.
Posted by The Discovery Center at 3:19 PM No comments:

The Eyes in Draco 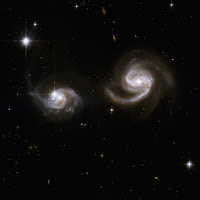 This Hubble image displays a pair of sprial galaxies with swirling arms. The binary glalactic system is located in the constellation of Draco, the Dragon, about 350 million light-years away. Although not found in the "head" area of Draco, these appear as eyes looking back on our own galaxy. Astronomers study glaxy pairs like this to determine the geometry of the universe, which sheds light on dark energy - which isn't just a SyFi term anymore.

Credit: NASA, ESA, the Hubble Heritage (STScl/AURA)-ESA/Hubble Collaboration, and A. Evans (University of VA, Charlottesville/NRAO/Stony Brook University). Space.com
Posted by The Discovery Center at 10:46 AM No comments:

The Blue Moon and the Number 13

"Once in a Blue Moon" refers to occasional happenings. A recent posting by Space.com revealed a little history behind the saying. Now, a blue moon is the second full moon in a month. In years past, especially before the calendar was standardized, it had another meaning. During a calendar year, usually there are 12 full moons which means 3 full moons in each of the 4 seasons. Occasionally, a calendar year will have 13 full moons. This means one season has an extra full moon. To keep track of time, the moons within a season were referred to a early, mid and late. A 4th moon appearing in a season created a problem. So the 3rd moon in that season was called a blue moon. This allowed the 4th and final moon to still be called the late moon. This extra full moon created additional problems. Monks who kept track of the calendar found this upset the regular arrangement of church festivals. The extra moon was difficult to predict and consequentially its occurrence disrupted a lot of well laid plans. This is one of the reasons the number 13 is considered unlucky. It was an unlucky monk who had to sort out the remaining festivals and rearrange the church schedule. This year, autumn has 4 full moons. Nov. 21st full moon will be the 3rd. Thus it is a Blue Moon by old standards. So enjoy its light and be thankful for a standardized calendar. (Photo by Astroseti.org)
Posted by The Discovery Center at 2:49 PM No comments:

The DC Women's Hiking Group will hike at Weir Farm this Tues. the 23rd.
We will meet in the parking lot of Ancona's off Branchville Rd. (Rt. 102) at 9:25am. and then carpool to Weir Farm.
Posted by The Discovery Center at 11:08 AM No comments:

November means a return of the Leonid Meteor Shower. The shower is caused by material left behind by the relatively small Comet Tempel-Tuttle as it passed the Earth’s orbit during its regular trip through our solar system. When the Earth passes through this debris, the gas and dust flares up in the atmosphere creating meteors. The comet cycles pass us every 33 – 34 years. In years that it is close-by, the displays are spectacular. In 1833 the shower was a storm with the night sky lighting up so brightly that it woke up the most of the people in the eastern USA and promoted research into meteors. In 1966 observers calculated sightings at 144,000 per hour or one every 40 seconds. Perhaps sometime around 2031 this will happen again. But this year’s display will not be close to this rate as the debris trail is not as dense.

Because the meteors come at us from the direction of the constellation Leo, the Lion, they are called Leonid. November 17 & 18th are the best nights to observe. The best times is between moonset (2:39AM) and sunrise. Find an area where there is very little ground light and has a good view of the southeastern sky. Stay warm and get comfortable. Using a lawn chair to recline in saves wear and tear on one’s neck. Lie back and relax as nature puts on its light show. Don’t worry; the world is not coming to an end as some thought in 1833.

Posted by The Discovery Center at 8:05 AM No comments:

The DC Women's Hiking Group will hike on Tues., Nov. 16th and Thurs., Nov. 18th at Rock Lot & Scott Preserve in Redding, CT at 9:30am.
Directions: Coming from the north on Route 7 turn left onto Old Redding Rd. (Right before Walpole)
Right after going under RR bear right onto Mountain Rd. Follow Mountain Rd. to end and turn left onto Peaceable St. Parking for the open space will be on the left. If you come to an electrical substation, you went too far.
There is limited parking, so if possible, please carpool.
Posted by The Discovery Center at 12:14 PM No comments: 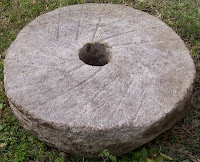 This week the Women’s Hiking group will explore Quarry Head State Park in neighboring Wilton. The park has a wide variety of habitats, offers magnificent views to the south and was once an important part of Wilton history. It was the site of Wilton’s most notable quarry. Starting in the 1700’s granite gneiss of the Ordovician age (490 – 443 million years old) was quarried here. The rock was used in house foundations and steps. Wilton’s Town Hall and the Ridgefield Congregational Church steps were quarried here. It was also used to make millstones like the one in the picture. Local grist mills used them to grind rye and corn.

The quarry operations ended at the turn of the 20th century. But many discarded blocks scattered about the park preserved the workmen’s tool marks. Look for drill holes and chisel marks in the rocks and ledges along the trails. After the quarry closed the area became a residence which is still evident by the preserved foundation and fireplace adjacent to the parking area. The Degener family acquired the property in the late 1920’s and lived here until 1988. With the help of the State of Connecticut Natural Recreation and Heritage Trust Program, Wilton acquired the 33 acres from the Degener family for open space. Although it is owned by the State of Connecticut, it still remains under the town’s jurisdiction. Enjoy your hike!

Posted by The Discovery Center at 8:05 PM No comments:

The DC Women's Hiking Group will be meeting on Tues. the 9th at Quarry Head in Wilton, CT at 9:30am. No hike on Thurs. (No school).
Directions to Quarry Head:
Take Rt. 35 through downtown Ridgefield to Rt. 33.
Follow Rt. 33 into Wilton.
There will be a brown State of Ct. sign for Quarry Head on the left side of the Rd. In between mailbox #'s 760 and 764.
Turn left and follow Rd. up to parking area up hill on right.
Posted by The Discovery Center at 4:00 PM No comments:

The DC Women's Hiking Group will hike at Pine Mountain on Nov. 2nd and Nov. 4th at 9:30am.
Take Pine Mountain Rd. to end and parking is on the right side of the road.
Posted by The Discovery Center at 2:58 PM No comments: