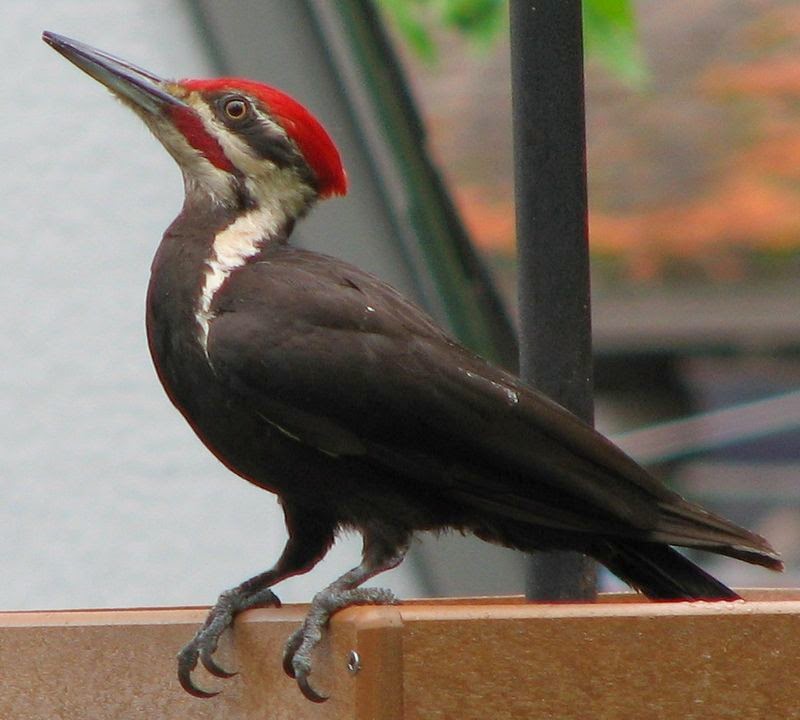 February’s bird walk was quite a challenge with deep snow covering the golf course.  Breaking trail with snowshoes required a lot of work.  After one hole, we were warmed up to coat unzipping level. But the day was perfect for birding – no wind and bright grey sky which allows one to see finer detail at a distance.  First bird of the day was the pileated woodpecker, discovered by hearing its loud pecking sound.  Nearly the size of a crow, this is the largest woodpecker in our area.  They have a long neck, a conspicuous triangular crest (entirely red in males), and a long chisel-like bill.  They are famous for creating rectangular shaped holes that are be so broad and deep, they can cause a small tree to break in half.  Clues to their work are large chips of wood on the ground.  Their favorite food is carpenter ants but they are willing to consume numerous other woodboring insects, plus wild fruits and berries.  They have long, barbed tongues which they use to extract their prey from deep within the wood.  Like today, one generally hears them first; hammering loudly and then you may catch their undulating flight pattern with strong rapid wing strokes alternating with brief periods of wings folded at their sides.  They are very important to the forest ecosystem.  As primary nest builders, their numerous excavations provide living quarters or shelter for many other cavity loving animals, like wood ducks, bluebirds, mice & flying squirrels.  We also managed to spot two small buteos – soaring hawks.  They may have been red-shouldereds but red-tails nest in that area too.  The distance made positive identification impossible which is a frustrating part of birding.  So without a doubt, the bird of the day was the magnificent pileated woodpecker.  It was worth all the energy to see it.

Posted by The Discovery Center at 2:26 PM No comments: 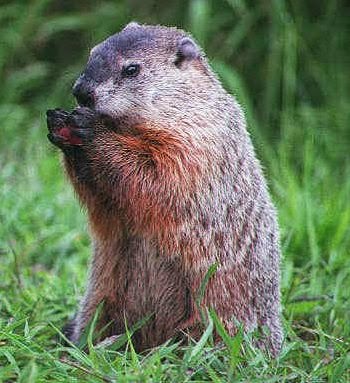 Groundhog Day has its roots deep in the past when nature’s cycles dominated one’s life.  It falls between the winter solstice and the spring equinox when in the far Northern Hemisphere winter is at its deepest.  At this point it was important to determine if there was enough food and hay to last till spring and what adjustments must be made.  Traditions developed to hone in on the date, have evolved over the eons.   Some say the early Christians took the Gaelic festival of Imbolc and converted it to Candlemas.  For centuries this was the day that the clergy blessed candles and distributed them to the people.  Thus reassuring their followers that the light will continue to grow and the dark of winter was behind them.  Regardless of whose traditions one quotes, this day revolves around the sun.  How a groundhog got involved seems to go back to German folklore where the prognostics were a badger or bear or a hedgehog.  It peeps out of its winter quarters and if the day is sunny, goes back to sleep for another 6 weeks.  If the day is cloudy, it stays out to enjoy the mild weather.  German settlers brought this tradition to American, specifically Pennsylvania.  There groundhogs were in abundance and thus took center stage.  It is said the first recorded celebration took place in Morgantown, PA in 1841. Now the largest celebration is held in Punxsutawney, PA where large crowds have gathered since 1886 to hear Phil’s predictions.  However, in CT we have our own prognosticating rodent, Chuckles VIII.  Unlike Phil who claims to be 125 years old and drinks a magic elixir to maintain his youth, Chuckles comes from a long line of diviners.  According to his handlers at the Lutz Museum, Chuckles takes a more scientific approach by “consulting with meteorologists, examining radar data, and reading the Farmer’s Almanac.” Chuckle’s conclusion:  2015 will have 6 more weeks of winter.
Posted by The Discovery Center at 10:04 AM No comments: