The DC Women's Hiking Group will hike Tues., May 1st and Thurs., May 3rd at Seth Low Pierrepont State Park in Ridgefield.
Entrance to park and parking off of Barlow Mountain Rd.
Meet at 9:30am.
Posted by The Discovery Center at 10:09 AM No comments:

The DC Women's Hiking Group will hike Tues., Apr. 24th and Thurs., Apr. 26th at Pine Mountain in Ridgefield.
Take Pine Mountain Rd. to near end and parking area on right.
Meet at 9:30am.
Posted by The Discovery Center at 5:43 AM No comments: 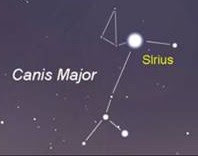 In early April 2012, soon after sunset, you can see 4 very bright points of light. Venus is by far the brightest of these. It is in the mid-west part of the sky -- in our Feb. 2012 Constellation of the Month, Taurus. Jupiter is low in the West. And Mars is towards the Southeast in the constellation of Leo, which we'll cover next month.

The southernmost bright object is the only star of the 4. This is Sirius, the Dog Star, in the constellation of Canis Major (Big Dog) -- which is southeast of our March 2012 Constellation of the Month, Orion. Sirius is the brightest star in the sky -- at any time of year, northern or southern hemisphere. It is brighter than Mars right now. Although Sirius appears notably brighter than Betelgeuse in Orion, it is only 23 times as bright as the Sun. As we said last month, Betelgeuse is 40,000 time brighter. So Sirius is much closer -- only 8.6 light years (about 50 trillion miles) away.

M41 is an open cluster of 8,000 stars south of Sirius. It is easily visible with binoculars.

The band of the Milky Way passes through Canis Major, although it is less prominent there than in our Dec. 2011 Constellation of the Month, Cassiopeia, and the summer constellations. This is because when we look at Canis Major, we are looking away from the center of the Milky Way galaxy, and there are fewer stars along the plane of the galaxy in that direction.

Posted by The Discovery Center at 4:58 PM No comments:

The DC Women's Hiking Group will hike Tues., April 3rd at Brewster Farm/Jones Trail in Ridgefield, CT. Meet at the cul-de-sac at the end of Lounsbury Lane (off of Florida Hill Rd.).
Meet at 9:30am.
No hike on Thursday April 5th due to no school.
Posted by The Discovery Center at 4:41 PM No comments: