The DC Women's Hiking Group will hike this week, Tuesday, Oct 4 and Thursday, Oct 6th at Tarrywille Park in Danbury:
From I-84 take the airport exit.
At end of ramp turn right.
Follow through traffic lights and at stop sign turn onto Southern Blvd. ( It will be a sharp right turn).
Follow small brown signs for Tarrywile Park.
The park will be on the right, across from Immaculate H.S.
Meet in lower parking lot at 8:30am.
Posted by The Discovery Center at 5:50 AM No comments: 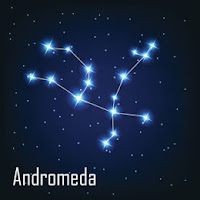 To the ancients the sky was their calendar.  They used it to predict the changing of the seasons by watching the patterns of stars as they moved across the sky.  How better to remember these sequences, than by a story.  Andromeda’s story includes five autumn constellations.  It begins with her parents, King Cepheus & Queen Cassiopeia of Aethiopia.  Cassiopeia, already known for her extreme vanity, declared that her daughter was more beautiful than the Sea Nymphs.   Greatly insulted, the Sea Nymphs turned to the God of the Sea, Poseidon for revenge.  He sent a great monster Cetus to ravage the coast of Aethiopia.  A desperate Cepheus, consulted the Oracle of Apollo who declared the only way to stop the carnage, was to sacrifice Andromeda to Cetus.  Stripped naked the poor girl was chained to a rock to await her fate.  As chance would have it, Perseus was flying by on the Great Flying Horse, Pegasus.  He was returning from slaying the snake haired Medusa and thus was still carrying Hades’ magical Helm of Invisibility, Athena’s Mirrored Shield,  and a sword forged by the God Hephaetus.  He easily slayed Cetus and immediately took Andromeda for his wife.  Together they had seven sons and two daughters and are credited as being the ancestors of the Persians. After her death, according to a Greek play, Athena placed her in the sky along with her hero husband.  And thus they lived "Happily Ever After".  Photo:  http://www.buzzle.com/articles/andromeda-constellation.html

Posted by The Discovery Center at 4:57 PM 2 comments: