December 2014 Constellation of the Month: Triangulum 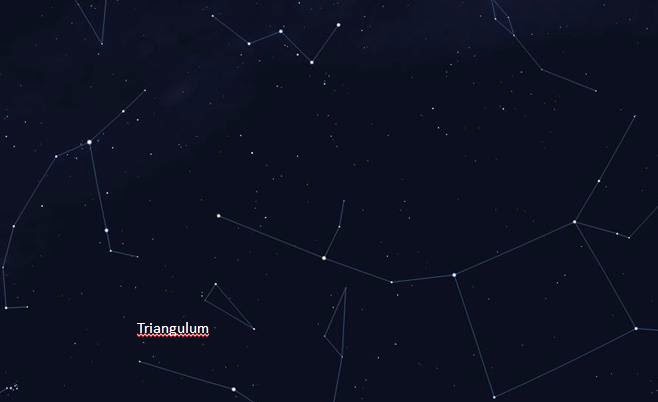 To the west of the great square of Pegasus, which we described last month, near the wishbone-shaped Perseus  is Triangulum.  It is a compact triangle with somewhat faint stars, so it will be a little challenging to find.  Some consider it an especially attractive constellation.
The big item of interest in Triangulum is the Triangulum Galaxy, M33.  It is the 3rd largest galaxy in our little Local Group of galaxies – after the Andromeda Galaxy (see Nov. 2012), and our own Milky Way.  When seen through binoculars or a small telescope, like the Discovery Center's, it is about the size of the full moon.
Which brings us to the question we posed last month:  How many full moons, side-by-side, would it take to stretch across the sky in a line (arc) from the eastern horizon to the western horizon?  The answer is about 360 – which is a lot more than most people guess.  That, coincidentally, is the number of degrees in a circle.  Since the arc we're talking about is a half-circle, the Moon is about ½ degrees in diameter, as it appears to us in the sky.  This, in an extremely unlikely coincidence, is the same size as the disk of the Sun.  That is why, in a full eclipse of the sun, the Moon will almost exactly cover the disk Sun.

You can prove this half-degree figure for yourself – and maybe win a bet or two, at sunset (or moonset).  When the bottom of the circle of the sun touches the horizon in the West, how long will it take for the Sun to completely set?  The answer is 2 minutes, which is a lot quicker than most people would guess.

Posted by The Discovery Center at 2:19 PM No comments:

Take I-84 West to exit 20 for I-684 toward NY-22/White Plains/Pawling.
Keep right at the fork, follow signs for NY 22/Brewster/Pawling and merge onto I-684N.
Continue on NY-22N.
Turn right onto Haviland Hollow Rd.
The Conservation Area will be on the left.
Meet at 8:30am.
Posted by The Discovery Center at 12:06 PM No comments: