The DC Women's Hiking Group will hike Tues., April 30th and Thurs., May 2nd at Hemlock Hills in Ridgefield.
Take Ridgebury Rd. turn right on to Ned's Mountain Rd.
Follow to Bogus Rd.  Parking area will be on the right side.
(Location of DC's Ghosts program.)
Meet at 8:30am.
Posted by The Discovery Center at 6:06 PM No comments:

Coming from the north on Route 7 turn left onto Old Redding Rd. Right after going under RR bear right onto Mountain Rd. Follow Mountain Rd. to end and turn left onto Peaceable St. Parking for the open space will be on the left. If you come to an electrical substation, you went too far.
Meet at 8:30am.
Posted by The Discovery Center at 5:50 PM No comments: 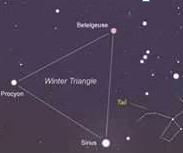 After the spectacular night sky of winter, with many bright stars forming easily-discernible   constellations, comes the comparatively  faint night sky of spring.  In our previous blog posts, we've covered the prominent constellations that are visible in April soon after sunset.  These include winter constellations which are now in the western part of the winter sky -- such as Orion, Gemini, Canis Major, and Auriga – a couple of spring constellations – Leo and Bootes – and one circumpolar constellation -- Ursa Major.

There is, however, one very bright star which is not included in any of these.  It is the 5th brightest star which can be seen in the Northern hemisphere – Procyon of the constellation Canis Minor ("Small Dog").  In mythology, Canis Major and Canis Minor are the hunting dogs of Orion the Hunter.  One star from each of these three constellations form the asterism called the "Winter Triangle".  (An asterism is a shape made of stars, which is not itself a constellation).  The 3 stars are Procyon, Sirius in Canis Major, and Betelgeuse, which marks the left shoulder of Orion.  The Winter Triangle looks almost perfectly equilateral – 3 equal sides, 3 equal angles.  It is very rare to find such regularity in the sky.

Procyon and Sirius appear very bright to us because they are so close – 11 and 8.5 light years respectively.  They are only 2 to 3 times as far away as the star which is nearest to us, Alpha Centauri.  Betelgeuse, on the other hand, appears so bright because it is extremely bright.  Betelgeuse is 650 light years away.

Canis Minor basically consists of Procyon and one other, much fainter, star northeast of it.  That one is called Gameon or Beta Canis Majoris.  (Procyon is Alpha).  Gameon is a 3rd magnitude star, which means it is fainter than all but one of the stars in the Big Dipper.  (The Big Dipper is itself an asterism which forms part of the larger constellation of Ursa Major.)
Posted by The Discovery Center at 5:43 PM No comments:

The DC Women's Hiking Group will hike Tues., April 9th, and Thurs., April 11th at Saugatuck Falls Natural Area in Redding, CT.
Saugatuck Falls Natural Area entrance is located between mail box # 65 and 73 on Diamond Hill Road, Redding. Follow straight in until you see the large sign (entrance marker) on your left.
Meet at 8:30am
Posted by The Discovery Center at 9:55 AM No comments:

Take exit 5 off of I-84. Follow Rt. 37 North past all the shopping centers. Go past the
commercialized district and eventually past the federal prison into the more
rural part of northern Danbury. About 0.2 mile past the prison entrance, on
the right, is Bear Mountain Road which is 2.8 miles from I-84. Turn right
onto Bear Mountain Road and follow it for 0.5 mile. Turn right into the
entrance of Bear Mountain Reservation.
Meet at 8:30am.
Posted by The Discovery Center at 10:39 AM No comments: