March Constellation of the Month -- Orion

Orion, the Hunter, is the most prominent constellation visible to us in the northern hemisphere at any time of the year. It's easy to identify by the three equally-bright stars, arranged in a line, which form Orion's belt.

The two brightest stars in the constellation are at the upper left and lower right, called Betelgeuse (beetle juice) and Rigel, respectively. Both are giant stars --but of very different types. Betelgeuse is a red supergiant star, it is nearing the end of its life. It has cooled and expanded to a size which is more than twice the width of the orbit of Mars -- about 500 times as wide as our own Sun. (In 5 billion years the Sun will be a red giant, its outer edge will expand out to envelop the Earth.)

But, the most spectacular objects in Orion are not the stars but nebulae. The Orion Nebula or Great Nebula of Orion is located between the two stars which make up the "sword" -- which are line up vertically below the belt. It is a huge cloud of gasses from which which many stars are being formed. The equally spectacular Horsehead Nebula and the Orion Nebula are just areas within a much larger nebula 1500 light years away from us.

Posted by The Discovery Center at 5:12 PM No comments:

The DC Women's Hiking Group will hike Tues., Mar. 27th and Thurs. Mar. 29th at
Saugatuck Falls Natural Area in Redding, CT. The entrance is located between
mail box # 65 and 73 on Diamond Hill Road in Redding. Follow
straight in until you see the large sign (entrance marker) on your left.
Meet at 9:30am.
Posted by The Discovery Center at 5:58 AM No comments:

Saturday, March 24 saw the Ridgefield Park and Recreation Center hopping with the 15th Annual Lego Contest. This year 91 contestants entered 73 creations and took away $1,000 worth of prizes. Thanks to all our sponsors: Union Savings Bank for Underwriting the prizes, Stop and Shop, Steve's Bagels, Planet Pizza, Dunkin' Donuts, Economy Printing, The Toy Chest, Ridgefield Park and Recreation Department and all our volunteers for making this event another success. Below is a list of the 2012 Winners:

Posted by The Discovery Center at 9:25 AM No comments:

The DC Women's Hiking Group will hike Tues., Mar., 20th and Thurs., Mar., 22nd at
Tarrywile Park in Danbury. Take 84 to the Airport Exit. Take a right at the
light at end of ramp. Follow road to stop sign and make sharp right turn onto
Southern Blvd. Stay on Southern Blvd. There will be signs for Tarrywile
Park. Follow signs and make a right to Tarrywile. Immaculate H.S. will be
on the left and the parking lot for Tarrywile will be on the right side. Meet
at 9:30am.
Posted by The Discovery Center at 5:39 PM No comments:

The Importance of Chipmunk Chatter 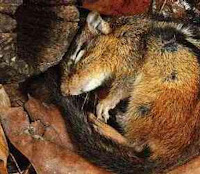 We credit this information to Roger De Silvestro's article "The Key to Chipmunk Chatter" in National Wildlife Magazine, April/May 2012. Chipmunk chatter is common around Ridgefield. It is usually divided into three calls: The chip, the deeper chuck and the startle call. It is meant for other chipmunks but it sometimes sends messages to other species. An example is to ground nesting birds whose eggs and young chicks are preyed on by chipmunks - no they just don't eat nuts. Two birds common in our woods, the ovenbird and veery, will use these sounds as a warning where not to build their nests. Another interesting fact that has emerged, is that the lack of chipmunk chatter is a climate change warning to humans. Studies done at Fordham University on wild individuals have shown that warmer winters effect the efficiency of chipmunks hibernation periods. Torpor is the method that chipmunks use during this time. They do not "sleep" through the entire winter but have active times where they moving around their burrow, feed and excrete. "A 0.9 - 19-degree F increase in mean air temperature during Nov. and Dec. corresponded with an average 37.5 day delay in the first onset of torpor bouts, a 60% reduction in the number of individuals going into torpor and a 88% decrease in the total amount of time spent in torpor." When chipmunks go into normal torpor 90% survive till spring; when they don't, 80-90% die. Since the winter of 2006-2007, chipmunks in the study area have not gone into regular hibernation. This may be an example of how hibernating mammals could be particularly sensitive to climate change. Thus, the less we hear that familiar chip, the more warning it is that climate change is "closing in".
Posted by The Discovery Center at 5:41 AM No comments:

Venus and Jupiter Doing the Do-Sa-Do

March 12, 2012 – Northern Hemisphere: Tonight as you look up into the western night sky, you will see two very bright objects fairly close to each other. They are Venus and Jupiter who have been dancing toward each other since the beginning of the month. Over the course of the evening, they will appear to line up side-by-side. Tomorrow night, March 13th, they will appear at their closest being separated by just 3 degrees with Venus located just above and to Jupiter’s right. This planet line-up is called a planetary conjunction. A Venus-Jupiter conjunction occurs about every 13 months. This conjunction will be exceptional with the planets appearing above the horizon starting at twilight for about 4 hours. Also, because the moon doesn’t rise till 10:30pm, they will stand out in the night sky. From Earth’s perspective, Venus will appear brighter than Jupiter even though it is 11 times bigger. As the week progresses, Venus will appear to move counter-clockwise to Jupiter in a classic do-sa-do move. For those who have a good view of the western horizon, Mercury will also be visible just at twilight. Image credit: Derek Shirlaw & Stellarium
Posted by The Discovery Center at 3:33 PM No comments:

The DC Women's Hiking Group will hike in Wilton, CT this week, Tues., Mar. 6th and Thurs., 8th, at Quarry Head.
Take Route 33 into Wilton.
In between address 760 and 764 there will be an accessway on the left.
Turn left and follow road up hill to parking on right.
Look for CT sign Quarry Head on left at beginning of accessway.
Meet at 9:30am.
Posted by The Discovery Center at 5:03 AM No comments:

On March 24th, the Discovery Center will hold its 15th Lego Contest. Have you ever wondered how Lego got its name and who invented these precise building blocks? The credit goes to Ole Kirk Christiansen, a Danish carpenter who began making wooden toys in his Billund workshop in 1932. Two years later his company took the name “LEGO”, from the Danish phase leg godt, which means “play-well”. In 1947 his workshop started producing plastic toys on the first injection-molding machine in Denmark. Two years later, they began to produce interlocking plastic blocks whose design was a modification of the British Kiddicraft Self-Locking Bricks. But sales were poor because at the time plastic toys were regarded as inferior to wooden toys. In 1954, Ole’s son Godtfred Kirk Christiansen saw the potential of turning the interlocking bricks into a creative play system. But first the bricks had to be improved. After 5 years of testing, in 1958 the modern Lego brick was patented. Regardless of the shape, each brick is designed to fit firmly but be easily dissembled with only a tolerance of 10 micrometre between bricks allowed. In 1963, Lego bricks began to be made out of Acrylonitrile Butadine Styrene (ABS) which creates an extremely hard matt finish that is scratch and bite-resistant. This process is still used today. By 2008, there were 2,400 different shapes being produced. Lego creations have found their way all around the world and beyond. In May 2011, the Space Shuttle Endeavor brought 13 kits to the International Space Station (ISS). Astronauts built the models to see how they react in microgravity as part of an NASA educational program whose results were shared with schools around the world. To avoid bricks floating around the ISS, Astronaut Stoshi Furukawa built a box with gloves in it where he assembled the 2’ model of the ISS that you see in the photo. Best of Luck to all in building your Lego Creation. – See you on the 24th.
Posted by The Discovery Center at 4:22 PM No comments: