No hike today (3/30) due to rain. The group will met Thursday, 4/1 at Aldrich Park in Ridgefield at 9:30 am. Directions: Take Farmingville Rd to New Rd. Parking area and park entrance is on New Rd.
Posted by The Discovery Center at 6:08 AM No comments:

The sounds of spring are reverberating throughout the woodlands. For the past week or so, spring peeper calls have intensified. But in some areas, interspersed in the peeper chorus is a series of short raspy quacks. This is the unique call of the wood frog. Wearing a mask and slightly bigger than the spring peeper, this little creature is so incredibly adapted that it can live above the Arctic Circle. Wood frogs inhabit the woodlands eating a wide variety of insects and other small invertebrates. In the late fall, it crawls beneath the forest floor's leaf litter and goes into a hibernation-like state. Over wintering on dry land and above the frost line would kill most cold-blooded vertebrates. But the wood frog is unique in that it can survive being frozen solid - a frog-sicle! In the very early springtime, it emerges from hibernation and immediately gets to the business of breeding. These otherwise solitary animals congregate in the large woodland puddles created by snow melt and spring rains called vernal pools. There they mate and lay their eggs in large blobs usually attached to some form of vegetation. The eggs become coated in symbiotic algae that helps give oxygen to the developing embryo. This makes them easily mistaken for clumps of algae. Depending on the temperature of the water, the egg to tadpole to frog metamorphosis could take from 50 - 120 days. This fast development is necessary as most vernal pools dry up before summer. If you would like to learn how this frog survives freezing see: http://www.youtube.com/watch?v=Fjr3A_kfspM or type "freezing frog" into You Tube's search.
Posted by The Discovery Center at 6:30 AM No comments:

The group will meet this week Tues and Thurs at 9:30 am at Topstone in Redding. Take Rte 7 to Topstone Rd. Stay on Topstone and cross RR tracks. Topstone turns into a dirt road and shortly after the parking area is on the right.
Posted by The Discovery Center at 4:17 AM No comments: 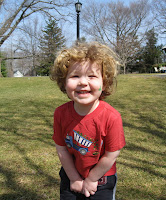 Yesterday was a great day for our St Patrick's Scavenger Hunt, and many leprechauns were spotted in Ballard Park! Click for photos.
Posted by The Discovery Center at 6:17 AM No comments:

Why Woodpeckers don't get headaches

Why Woodpeckers don't get headaches: Of all the birds, woodpeckers have the thickest skulls specially designed to withstand repeated blows. Their skull bones are relatively spongy which cushions their little brains. In animals the space between the brain and skull contains a liquid which allows the brain to move about slightly. A blow to the head that makes the brain move too rapidly can cause a headache or worst a concussion (bruising of the brain by hitting the skull). However, woodpeckers skulls contain very little of this fluid making its brain fit more tightly in its skull and thus allowing less movement. The beak and skull are not joined by bone but by cartilage. This cushions each blow. In addition, just before a strike, its jaw muscles contract so that the force of the blow is spread out over its head and along its entire body. Through all these adaptations, woodpeckers have developed to be one of the animals least likely to get a concussion. In fact, the louder the noise, the better they like it.
Posted by The Discovery Center at 1:23 PM No comments:

The Women's Hiking Group will meet Tuesday (3/16 and Thursday (3/18) and hike at 9:30 am at Bear Mountain and Candlewood Lake. Directions from I-84:
Take exit 5 off I-84. Follow Rte 37 North past all the shopping centers to more rural part of Danbury. Bear Mountain Rd is 2.8 miles from I-84 on right. Turn right onto Bear Mountain rd and follow for 0.5 mile. Turn right into entrance of bear Mountain Reservation where there is a large paved parking lot. For map click here.
Posted by The Discovery Center at 5:39 AM No comments: 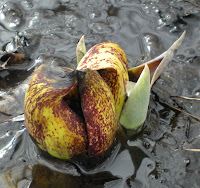 The First Flower of Spring begins to bloom while winter is still strong. Since February, skunk cabbage buds have appeared like little monks sticking up out of the wetlands. The little hood is called a spathe and it appears either reddish or mottled. Under this protective hood is a little club called a spadix. On it are numerous, tightly packed petal-less yellow flowers. Amazingly when the plant is in flower, it produces a great deal of heat. Inside the spathe it could be 20 degrees warmer then the outside. This accounts for its ability to melt its way up through the snow or ice. The skunk-like odor that gives the plant its name, is an important adaptation. Nature's earliest pollinators are small flies and other insects that are mainly carrion eaters.
The shape of the spathe plus the plant's heat creates an inviting warm draft which smells like dinner to them. Once they venture inside, the spathe provides a cozy dinning space. For several weeks, this process goes on until the spadix's flowers are pollinated and the blossom begins to wilt. As it starts to wilt, the leave bud - the green point next to the spathe in the picture, begins to unfurl into the largest leaves in the wetlands. By the time the crocuses are blooming, most skunk cabbage blossoms have long passed.
Posted by The Discovery Center at 7:35 PM No comments:

Due to weather predictions of rain and storms this weekend and wet park conditions, we have rescheduled our St. Patrick's Scavenger Hunt in Ballard Park to Saturday, March 20 at 1:00 pm (rain date Sunday, March 21). To register for this fun family program click here.
Posted by The Discovery Center at 7:41 AM No comments:

The Women's Hiking Group will meet Tues (3/9) and Thurs (3/11) at 9:30 am at Florida Refuge, off Florida Hill Road, parking area off North Valley Road in Ridgefield.
Posted by The Discovery Center at 10:56 AM No comments:

The Women's Hiking Group will meet this week Tues (3/2) and Thurs (3/4) at 9:30 am at Bennett's Pond. Directions; take Rte 7 to Bennett's Farm Road. Trail entrance and parking area are on Bennett's Farm Rd.
Posted by The Discovery Center at 4:50 AM No comments: 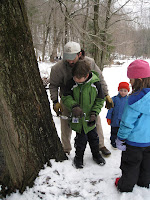 We visited New Pond Farm yesterday for a lesson on maple syruping, including how to tap a tree and boil down the sap to make delicious syrup. It was a great day on the farm. See more photos.
Posted by The Discovery Center at 2:16 PM No comments: