The D C Women's Hiking Group will hike this week Tues., May 31st and Thurs., June 2nd at Topstone Park in Redding, CT.
Take Rt. 7 to Topstone Rd. Follow across R.R. tracks continuing on Topstone Rd.
Keep on Topstone Rd. till turns to dirt Rd.
Shortly after there will be a parking area on the right.
Meet at 9:30am.
Posted by The Discovery Center at 5:50 PM No comments: 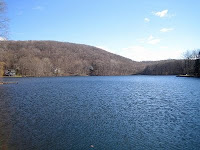 This week the Women's Hiking group will be exploring the park. But who was Seth Low Pierrepont? He was a millionaire and ex-diplomat who served as a US official in Italy, France and Chile. He was also chief of the American Division of the US State Department. In the early 1930's he purchased this large tract of land from the Scott family and made it into his estate. Upon his death in 1956, he gifted it to the CT State Park & Forest Commission. Its 313 acres contains trails with views, Lake Naraneka (Pierrepont Pond) and history.

The Scott family has a long history in Ridgefield. David Scott was one of the original Proprietors and purchased lot 13 on June 3, 1712. The family included a number of Ridgefield patriots, tanners, millers and of course farmers. When Rana Scott married John Barlow Jr. in 1789, this area was already referred to as the Scotand District and was a thriving community. It is the old foundation of the Scott house dating from 1720's that can be seen at the boat launch. Hints of their farming life can be seen in the stonewalls throughout the park and the cellar holes on the northern end of the park. One of these cellar holes was John Barlow's blacksmith shop. What is now Old Barlow Mountain Road was a main thoroughfare into town. General Wooster led his troops along it on his way to meet the British Army in what was to become The Battle of Ridgefield. Scotland & Barlow Mountain Elementary Schools along with Scott's Ridge Middle School bear the legacy of this family.
Posted by The Discovery Center at 7:31 AM No comments:

The DC Women's Hiking Group will be hiking at Pierrepont State Park in Ridgefield.
The Park is located on Barlow Mountain Rd. near Scotland Elementary and Barlow Mountain Elementary Schools.
Meet in parking lot at 9:30am.
Posted by The Discovery Center at 3:46 PM No comments: 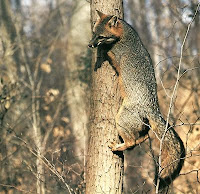 A pair of moving ears caught my eye. Looking down from my desk’s window, there was a gray fox sauntering over the brook’s footbridge and across to the old stonewall. It stopped to listen. Seeing golfers moving down the green, it concealed itself between the stonewall and the ancient sugar maple. Like a child playing peek-a-boo, its head periodically popped up over the stonewall. Occasionally, it wandered around a fallen tree looking frequently back at our birdfeeder but returned to its game of peek-a-boo whenever golfers walked by. Dog and I had seen this little visitor frequently over the winter. Smaller and thicker necked than the more abundant red fox, the gray has a black mane running the length of its tail ending in a definite black tip. Red foxes' tail tips are always white. In pre-colonial times it was the only fox in our area. Now with the return of more forest habitat, they are making a comeback. Well adapted to the woods, they are the only American canine with true climbing ability. They are omnivores with a strong preference for cottontails and other small mammals. As optimists, they also like fruits, insects, birds and more vegetation than reds. But like reds, they change their diet according to what is seasonally abundant. Grays are monogamous, mating in the early part of the year. By now the kits have been born and are hidden somewhere in the rocky woodlands. Both parents tend the litter of 1 - 7 kits. The young are weaned by 3 months, and hunt for themselves at 4 months. The family group will remain together until the fall when the young reach maturity and go off on their own. (Photo from itsnature.org website)

Posted by The Discovery Center at 1:13 PM No comments: 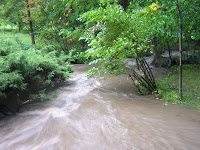 Even before man developed civilization, flooding was a problem. However, in nature flooding is necessary. It is nature’s way of:

1. Filtering out sediment and pollutants from surface run-off by dispersing it over larger area.
2. Slowing down the speed of run-off allowing it to soak down into the ground. This recharges the groundwater which modern man depends heavily on for potable water.

The area round a waterway that is prone to flooding is called the flood plain or riparian zone. It usually supports a wide variety of plant and animal life. How large an area this zone covers is determined by the slope of the land. Marshes and swamps, commonly now referred to as wetlands, also are part of nature’s system in controlling water flow. They act like sponges and filters and are virtual grocery stores and nurseries for wildlife. When man chooses to build within or alter these wetlands, inevitably there are consequences. Flood plains, marshes and swamps were made to flood. As we learn every spring, man’s control over them is limited. (Photo: Mopus Brook, Ridgefield in flood)
Posted by The Discovery Center at 8:16 AM No comments:

The DC Women's Hiking Group will hike on Tues., May 17th and Thurs., May 19th at Pine Mountain.
Take Pine Mountain Rd. to near end.
Parking area on right side of Rd.
Meet at 9:30am.
Posted by The Discovery Center at 10:43 AM No comments:

The DC Women's Hiking Group will meet at Aldrich Park in Ridgefield at 9:30am May 10th and May 12th.
From Rt. 35, turn onto Farmingville Rd. and turn left onto New Rd.
Parking will be on the left.
From Rt. 7, turn onto New Rd. and follow up to parking area on the right just before intersection with Farmingville Rd.
Posted by The Discovery Center at 1:42 PM No comments:

Here is an extraordinary flash back in time. Argentinean astronomers Julia Arias (Universidad de La Serena) and Rodolfo Barbá (Universidad de La Serena and ICATE-CONICET) used the Gemini South telescope in Chile to capture this composite image of the Lagoon Nebula. An all-time favorite of skywatchers on both hemispheres, the Lagoon Nebula (Messier 8, or M8) is among the most striking examples of a stellar nursery in our neighborhood of the Milky Way galaxy. In smaller amateur telescopes, it appears as a pale ghostly glow with a touch of pink. Inside this fuzzy glow is a chaotic environment where new stars are born. It is located in the direction of the constellation Sagittarius in the southern Milky Way. The light to create this psychedelic image took 5,000 years to reach the gigantic Gemini 8-meter mirror. The Gemini Multi-Object Spectrograph (GMOS) on Gemini South captured the light for the spectacular new image from its perch on Cerro Pachón in the Chilean Andes. Thanks to Heidi Hammel for bringing this wonderful image to our attention. For more information go to: http://www.gemini.edu/node/11631

Posted by The Discovery Center at 3:43 PM No comments:

The DC Women's Hiking Group will meet Tues. & Thurs. May 3rd & 5th at Lewisboro Town Park in Lewisboro, NY.
Take Rt. 35 from Ridgefield into NY.
Turn left off of Rt. 35 into the park.
Meet at 9:30am.
Posted by The Discovery Center at 3:09 PM No comments: