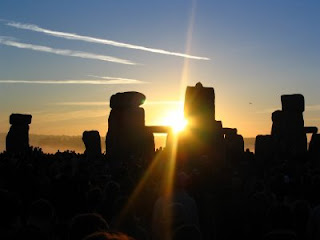 Today is the “Longest” day of the year - the Summer Solstice. Called a variation of Midsummer by most northern cultures, this marks a day of great celebration. When man determined time by the sun and moon, midsummer was the middle of the growing season. Most celebrations took on a joyous quality. At Midsummer food was easier to find, herbs could be gathered and crops had been planted in anticipation of a bountiful harvest. It was considered by some cultures a good time to wed as it fell between the intense work of planting and harvesting of crops. The “downtime” could be spent in preparation and celebrations. In China it was a time of balance. Midsummer celebrated the earth, the feminine, and the yin forces. It complemented the winter solstice which celebrated the heavens, masculinity and yang forces.

Now with modern technology driving our lives, it is barely noticed. However, the natural world will be resetting its internal clocks to reflect the eventual slide toward the cold season. Now is the time for second clutches of eggs or litters and for the young to start their intense survival training. Sunlight drives the natural rhythm of plants. The work of photosynthesis has reached its peak and now food production will decline. With the gradual decrease in sunlight some plants will start setting buds for the next growing season. We owe this all to the 23.5º tilt of Mother Earth. It causes sunlight to be unevenly distributed over our planet’s surface as it orbits around the sun. This creates the seasons – the main driver behind the Rhythm of Life. (Originally posted 6-20-12)
Posted by The Discovery Center at 4:04 PM No comments:

Come join us for our last week of hiking before summer break!
The DC Women's Hiking Group will hike Tues., June 19th and Thurs., June 21st at Pierrepont State Park.
Off Barlow Mountain Road and meet in parking lot at 9:30am.
Posted by The Discovery Center at 12:01 PM No comments:


Posted by The Discovery Center at 3:24 PM No comments:

June 2012 Constellation of the Month: Bootes 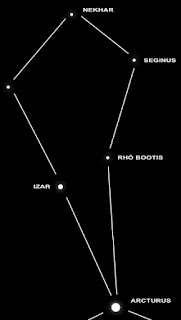 The arc of the Big Dipper's handle points to the kite-shaped constellation called Bootes.  At the bottom of the kite is the very bright star Arcturus, which is just south or southwest of directly overhead during June.  In Greek mythology, Bootes is either the Hunter or Herdsman – hunting or herding the bear represented by the Big Dipper (Ursa Major, or Big Bear in Latin).  In June 2012, there are two bright planets Saturn and Mars, which are south and west of Arcturus, in the nearby constellations Virgo and Leo, which was our May 2012 Constellation of the Month.

Arcturus is the 2nd brightest star visible from earth's northern hemisphere, after Sirius, which is in our April 2012 Constellation of the Month, Canis Major.  It just edges out the very bright Vega, in the constellation Lyra, northeast of Bootes.  Arcturus appears orange to the naked eye, and it is classified as a red giant – which is what our sun will become in about 5 billion years, as it nears the end of its life.

There are no exciting nebulae or galaxies in Bootes, but there are some nice double stars which can be seen as such in binoculars.  The best of these is named Izar, or epsilon Bootis.  It has an orange giant close to a white dwarf.  It was given the name Pulcherrima, "most beautiful," by its discoverer.

Posted by The Discovery Center at 9:46 AM No comments:

The DC Women's Hiking Group will hike Tues., June 5th and Thurs., June, 7th at
Tarrywile Park in Danbury. Take 84 to the Airport Exit. Take a right at the
light at end of ramp. Follow road to stop sign and make sharp right turn onto
Southern Blvd. Stay on Southern Blvd. There will be signs for Tarrywile
Park. Follow signs and make a right to Tarrywile. Immaculate H.S. will be
on the left and the parking lot for Tarrywile will be on the right side. Meet
at 9:30am.
Posted by The Discovery Center at 5:04 PM No comments: