The DC Women's Hiking Group will hike Tues., April 29th and Thurs., May 1st at
Saugatuck Falls Natural Area in Redding, CT. The entrance is located between
mail box # 65 and 73 on Diamond Hill Road in Redding. Follow
straight in until you see the large sign (entrance marker) on your left.
Meet at 8:30am.
Posted by The Discovery Center at 5:58 PM No comments:

Pi, the mathematical constant not the delicious desert, is the ratio of the circumference of a circle to its diameter.  It is an irrational number, which is a number that cannot be expressed as a simple fraction, or as such doesn’t settle into a repeating pattern or in fact end.

For most scientific applications 40 digits or less are accurate enough, but some people just like breaking records. In 2011, Alexander J. Yee and Shigeru Kondo calculated 10 trillion digits taking just little over a year to do so, on a desktop computer.  As of now the last know digit of Pi is a 5.  On the other hand, the record for the most number of digits memorized goes to Lu Chao of China who recited 67,890 digits accurately in 24 hours and 4 minutes on November 20th 2005.

The day March 14 is sometimes referred to as Pi day as March is the third month, thus 3/14.  It is celebrated by math jokes and eating various foods that start with “Pi” such as Pineapple, Pine Nuts, Pizza, and of course Pie.  Check out what’s going on in your area when it next rolls around.
Posted by The Discovery Center at 5:23 AM No comments:

The DC Women's Hiking Group will hike at Topstone Park in Redding on Tues., April 22nd and Thurs., April 24th.

Take Topstone Rd. off of Rt. 7.
Follow road over RR tracks until it becomes a dirt road.
Shortly after, a parking area will be on the right side of the road.
Meet at 8:30am.
Posted by The Discovery Center at 4:08 AM No comments: 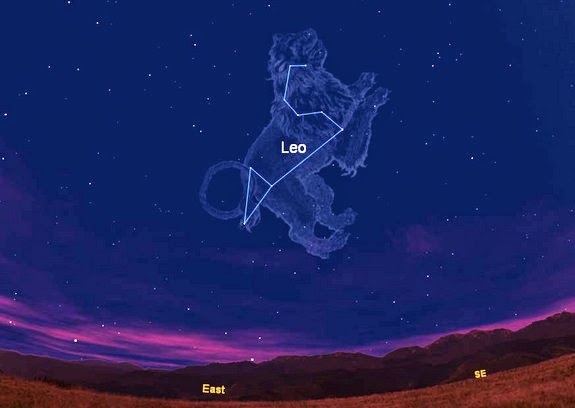 April 2014 Constellation of the Month: Leo


Every year, around March, Leo makes its appearance low in the Southeast, a welcome sign that spring is on the way.  Leo is easily recognizable by two shapes it contains – a triangle and a backwards question mark.  The latter shape is known as "the Sickle".


First, find the Big Dipper (Ursa Major).  Imagine a line extending from the bottom of the Dipper's bowl southward to the horizon.  About halfway to the horizon is the constellation Leo, the Lion.  In case it's easier to remember, start with the two stars at the right edge of the Dipper.  If you follow the line they make to the North, you'll find the North Star.  Go the opposite way (South) and you'll find Leo.

Traditionally, the head of the Lion is pictured as being outlined by the Sickle, and its hindquarters by the triangle.  Some people, however, have an easier time picturing the
triangle as a head and the Sickle as a tail.

Leo's brightest star, Regulus, is at the dot of the question mark (bottom of the handle of the Sickle).   It's actually a 3-star system with the blue-white main star about 140 times as bright as our sun, which is orbited by a pair of much fainter, much lower-mass red dwarfs.  There is also evidence of a 4th star, which has not been directly observed.

Just below the triangle is a pair of spiral galaxies, M65 and M66, which can be seen in a small telescope – like the ones the Discovery Center brings to its astronomy events.   Every November, there is a meteor shower in which the  meteors appear to be coming from the direction of Leo.  So, the shower is called the Leonid shower.

Posted by The Discovery Center at 11:57 AM No comments:

The DC Women's Hiking Group will not hike on Tues., April 15th and Thurs., April 17th due to Spring break and no school in Ridgefield.
Posted by The Discovery Center at 10:18 AM No comments:

The DC Women's Hiking Group will hike at Pine Mountain in Ridgefield on Thurs., April 10th.
Take Ridgebury Rd. to George Washington Highway.
Make right on to Pine Mountain Rd.
Parking area will be near end of road.
Meet at 8:30am.
Posted by The Discovery Center at 6:29 PM No comments: