The Discovery Center Women's Hiking Group will snowshoe Thursday, January 29th at the Ridgefield Golf Course. Take Ridgebury Rd. and turn left onto Dhly.
Come try out snowshoeing.  We will provide the snowshoes, so give it a try.
Posted by The Discovery Center at 7:39 PM No comments:


It was a brisk but sunny morning near Lake Windwing, but birds are not "bird brained" at all.  If you want to find them, look for warm, sunny spots sheltered from the wind.  We had luck on the far, sunlit side of the lake where there was quite a flurry of activity near the water's edge.  It was surprising to learn that some birds, like bluebirds, change their diet from insects to fruits and seeds during the winter months.  But others, like goldfinches, can remain year-round because their diet is all seeds.  Berries such as winterberry, juniper, & holly are an important food source.  As are the highly invasive oriental bittersweet’s orange berries.  Noah observed that during his youth, he never saw robins in the winter but looked for their red breasted appearance and "cheer-up cheerily" call to herald in the springtime.  Possibly climate change, population pressures and habitat factors account for the observation that robins and other birds that used to migrate south are staying through the New England winter.  We saw cardinals, chickadees, nuthatches, titmice and dark eyed juncos which Noah called the "usual suspects".  Also, we observed a white-throated sparrow, song sparrow, and a female red-bellied woodpecker climbing up a trunk.  Noah instructed us in a few basic good birding tips:  1) Don’t point your finger at the birds as this seems to scare them away (although talking does not seem to bother them).   2) Don't use your bird apps to play recorded bird calls, especially during nesting season, as this possibly effects the establishment of territories.   3) Don't let everybody "pish" (a sound that mimics the warning cry of certain species) in order to flush birds them out.  Instead, if this appears necessary, designate one person to do it.  The morning ended with the sight of 4-5 crows chasing a red tailed hawk with raucous cries and dive bombing the poor fellow until he moved on.  This is called mobbing.  The walk proved that there are plenty of birds to spot in the winter months, all you have to do is bundle up and know where to look. Photo (http://en.wikipedia.org/wiki/White-throated_sparrow)
Posted by The Discovery Center at 6:37 PM No comments: 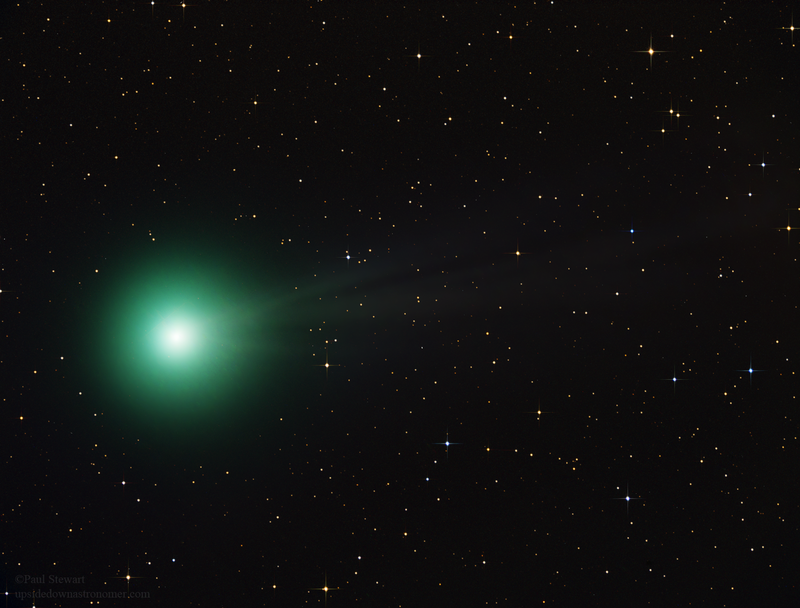 Over the next two weeks, the Lovejoy Comet (C/2014 Q2) is making an appearance in our early-evening skies.  If you are fortunate to have a dark sky and good vision, it is dimly visible to the naked eye.   Otherwise we strongly recommend using binoculars or low-power, wide field telescope.   It is a long-period comet with an orbit of about 11,500 years.  So if you happen to miss it, it will return in about 8,000 years.  Like most comets, it has a greenish head.  This is the result of diatomic carbon molecules (C2) fluorescing in ultraviolet sunlight while it travels through the near-vacuum of space.   The tail, which always points away from the sun, is tinted blue from the fluorescing of carbon monoxide ions (CO+).   Its overall whitish appearance is from dust reflecting the sunlight.  It is 44 million miles away and traveling 3° overhead a night which is fast enough so that it may move during a viewing session.  It will be nearest to the sun on January 30th, a mere 120 million miles away.  The comet is named after its discoverer, Australian amateur astronomer Terry Lovejoy.  He discovered it on August 17, 2014.  It is the 5th comet he has discovered from his Brisbane, Queensland home.  There are numerous web-sites providing information on how to locate the Lovejoy comet.  You can find them by typing “Lovejoy Comet 2014” in your search engine.  Photo by Paul Stewart, http://en.wikipedia.org/wiki/C/2014_Q2_%28Lovejoy%29
Posted by The Discovery Center at 12:50 PM No comments: 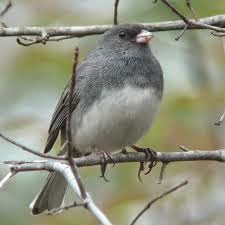 This medium size sparrow is Ridgefield’s “Herald of Winter”.  Flocks of them arrive in our area in mid-October and stay until spring has reclaimed the land.  The rest of the time, they live a more solitary life in the northern coniferous or mixed coniferous-deciduous forest where they breed and raise their young.  There are at least 5 different types of Dark-eyed Juncos.  In our area, most are the Slate-colored race.  They’re easy to recognize by their dark gray plumage that contrasts with its white lower breast, belly and tail feathers which they plump and flash in flight.  The females tend to be a duller color but still display that burst of white in flight.  A ground loving bird, they forage by hopping instead of walking while pecking and flicking about the forest leaf litter or gleaming seeds off low lying branches.  They even build their nests on or close to the ground.  The female picks the site and takes 3 – 7 days to weave her nest shaping it with her body.   There she will lay her 3-6 eggs which hatch in about 11–13 days.  After intense feeding by both adults, the hatchlings will fledge in about 9 – 13 days.  Depending on food availability, this whole process might be repeated up to 3 times during the summertime breeding season.  Juncos are primarily seed eaters but they do supplement their diet with insects during the breeding season.  They are one of the most abundant birds at our wintertime feeders.  They will feed on any type, be it a platform or hanging onto a perch or just gleaming scattered seeds on the ground.  During a storm, it is very common to see them hunkered down in the snow under your deck or landscaping shrubs.  For more information about them visit:  http://www.allaboutbirds.org/guide/dark-eyed_junco/id
Posted by The Discovery Center at 12:29 PM No comments:

Jan 2015 Constellation of the Month – Auriga 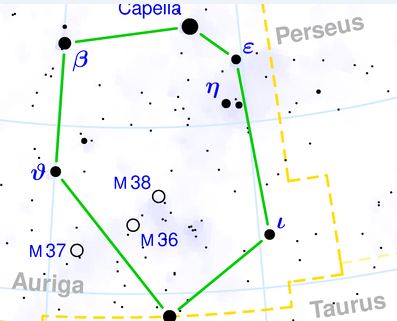 Auriga is shaped like a pentagon, or a child's drawing of a house.  It has one magnitude 0 star, Capella, and the other 4 are 2nd magnitude.  Like so many other stars, Capella is a multiple star. It is comprised of 4 stars, made up of 2 binary pairs which orbit around each other.  One is a pair of bright yellow stars in the same category (G) as our Sun.  They are each 10 times as large as the Sun.  This may be because they are expanding on their way to becoming Red Giant stars, which is near the final stage of the life of stars like the Sun.  The other two are red dwarf stars.  These are small-mass stars which are relatively cool.  Red stars – like red flames on earth are cooler than yellow stars like the Sun, which are, in turn, cooler than blue or white stars.  Being of lower mass and cooler than other stars, they evolve more slowly and live longer than massive blue or white stars.

Auriga is home to 3 bright open star clusters – M36, M37, and M 38.  They can all be seen in one field of view with wide-angle binoculars.  Other points of interest are two eclipsing variable stars.  These appear to vary in brightness when viewed from the earth, because the two stars appear either side-by-side or one in front of the other.  Other variable stars actually change their brightness by expanding and contracting.
Posted by The Discovery Center at 9:17 AM No comments: