Take exit 5 off of I-84. Follow Rt. 37 North past all the shopping centers. Go past the
commercialized district and eventually past the federal prison into the more
rural part of northern Danbury. About 0.2 mile past the prison entrance, on
the right, is Bear Mountain Road which is 2.8 miles from I-84. Turn right
onto Bear Mountain Road and follow it for 0.5 mile. Turn right into the
entrance of Bear Mountain Reservation.
Meet at 8:30am.
Contact:  Mendy Polchinski at 203-241-1770 or mmpolchinski@gmail.com.
Posted by The Discovery Center at 5:03 PM No comments:

The snow is finally here!
Come join the DC Women's Hiking Group for snowshoeing at the Ridgefield Golf Course on Tues., Jan.  26th and Thurs., Jan.  28th.
There will be snowshoes to borrow.
Take Ridgebury Rd. and make a left onto Dhly.
Meet in the parking area at 8:30am.
Posted by The Discovery Center at 6:47 AM No comments: 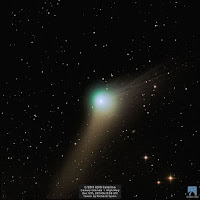 A visitor from the Orb Cloud, the most outer region of our solar system, Comet Catalina was first thought to be an asteroid with a short period orbit.  But after further observation it was determined to have been knocked out of the Orb Cloud by some passing nameless star long ago and was on a several million year trajectory course out of our solar system.  It was discovered on Oct 31, 2013 at the Catalina Sky Survey’s Schmidt-Cassegrain telescope, located in the Catalina Mountains outside of Tucson, Arizona as part of NASA-funded program to find Near Earth Objects.  The comet will come closest to Earth on Jan. 12th, a mere 66.9 million miles away.  Officially named C/2013 US10 this one time visitor to our night sky has two tails. A plasma tail made of ionized gas, and a dust tail made of small solid particles.  Because the escaping gas and dust are affected by the Sun in slightly different ways, the tails point in slightly different directions.   The core of the comet is like a dirty snowball.  As it approaches the sun’s warmth the gas and dust sublimate into a glowing atmosphere called the coma.  Scientists believe that Comet Catalina is a young comet, traveling in a chaotic orbit affected by galactic tides and passing stars.  This fly-by is really the last it will see of our Sun.  As it sling shoot around the sun, it built up enough velocity  to escape the Sun’s  gravitational force and continue its wild ride into the universe beyond. Photo:  Amateur astronomer Rich Tyson, the Slooh Observatories on the Canary Islands Dec. 12.

Posted by The Discovery Center at 8:47 AM No comments: