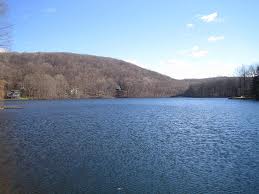 This year the Women's Hiking group will start its weekly hikes at Seth Low Pierrepont State Park. But who was Seth Low Pierrepont? He was a millionaire and ex-diplomat who served as a US official in Italy, France and Chile. He was also chief of the American Division of the US State Department. In the early 1930's he purchased this large tract of land from the Scott family and made it into his estate. Upon his death in 1956, he gifted it to the CT State Park & Forest Commission. Its 313 acres contains trails with views, Lake Naraneka (Pierrepont Pond) and history.
The Scott family has a long history in Ridgefield. David Scott was one of the original Proprietors and purchased lot 13 on June 3, 1712. The family included a number of Ridgefield patriots, tanners, millers and of course farmers. When Rana Scott married John Barlow Jr. in 1789, this area was already referred to as the Scotland District and was a thriving community. It is the old foundation of the Scott house dating from 1720's that can be seen at the boat launch. Hints of their farming life can be seen in the stonewalls throughout the park and the cellar holes on the northern end of the park. One of these cellar holes was John Barlow's blacksmith shop. What is now Old Barlow Mountain Road was a main thoroughfare into town. General Wooster led his troops along it on his way to meet the British Army in what was to become The Battle of Ridgefield. Scotland & Barlow Mountain Elementary Schools along with Scott's Ridge Middle School bear the legacy of this family.
(This post first appeared on Sept 27, 2010 & Sept 5, 2011
Posted by The Discovery Center at 11:50 AM No comments:

As school starts up, it's time to get hiking again.
The DC Women's Hiking Group will start up for the season on Thurs., Aug. 29th.
We will hike at Seth Low Pierrepont State Park in Ridgefield.
The park is located on Barlow Mt. Rd. across from Scotland and Barlow Mt. Elementary Schools.
Meet in the parking area at 8:30am.
Posted by The Discovery Center at 6:12 PM No comments:


When the full moon rises tonight (Aug. 20), it will technically be a Blue Moon, but not for the reason you might think.


The Blue Moon tonight is not the second full moon of August, but actually gets its name from a relatively obscure rule of astronomy. And there are a few other details about the full moon that might surprise you.


So to celebrate the Blue Moon, here are five amazing facts about this month's full moon:


1) It is not really blue: Okay, so not really a newsflash, but the Blue Moon's name actually has nothing to do with color. Occasionally, the full moon can take on a reddish pallor, but today's full moon is not related to the actual color of Earth's cosmic neighbor. The moon can appear blue in color if a forest fire or volcanic eruption litters the upper atmosphere with ash or smoke. A volcanic eruption gave the moon a bluish tint from the perspective of many people on Earth in 1991.


2) There are two definitions for Blue Moon: The term Blue Moon was originally assigned to the third full moon in a four moon season, but after a mix up in "Sky & Telescope" magazine in 1943, the term took on a different meaning. An article in the magazine incorrectly defined a blue moon as the second full moon in a single month, but the definition stuck. This particular blue moon is a technical Blue Moon, but does not meet the criteria for the second definition. The third full moon in a four-full-moon season rule was detailed in a 1937 edition of the now defunct Maine Farmers' Almanac.


3) The Blue Moon has many names: Today's full moon is also known as the Full Sturgeon Moon, the Green Corn Moon, the Grain Moon, and the Full Red Moon. Each of the August full moon names come from monikers given to the full moons of a certain month according to Native American and European traditions.


4) It is only full for a moment: Although the moon usually looks full one day before and one day after the day of the full moon, there is technically only one moment when the moon is full in the sky. Tonight, the moon turns full at 9:45 p.m. EDT (0145 Aug. 21 GMT), when (weather and light permitting) the moon will be in view for people along the eastern coast of the United States.


5) It is kind of a rare sight: Blue Moons occur somewhat infrequently. After today's full moon, another Blue Moon will not occur again until 2015. The idiom "once in a Blue Moon" signifies a rare event because scientists had trouble predicting when the distinctive full moon would happen during any given year.


By Miriam Kramer. Original article on SPACE.com.
Posted by The Discovery Center at 10:11 AM No comments:

August 2013 Constellation of the Month -- Lyra

Lyra can be easily found by locating the brightest and northernmost star in the huge and prominent  Summer Triangle of stars.  This star is Vega in the constellation Lyra.   Lyra is a very small constellation compared with the two constellations which sandwich it – Cygnus to the East and Hercules to the West.  Besides Vega, Lyra's most noticeable feature is an almost perfect parallelogram formed by four stars of roughly similar brightness.  In mythology, Lyra represents a Lyre, which is a type of hand-held harp

You can't see it with the naked eye, but the diagram above shows the location of the Ring Nebula, M57.  This is rightly the most famous "planetary nebula" in the sky.  Nebulae are immense clouds of gas, and planetary nebulae those that appear to be spherical or ring-like in shape.  Whereas nebulae like the Orion Nebula are birthplaces to many stars, planetary nebulae are usually the remains of a star that has exploded.

Lyra's other notable deep-sky object is the globular cluster of stars, M57. It has over 30,000 stars, with a total diameter of about 85 light years. Globular clusters have some of the oldest stars in a galaxy.  They were formed outside the disk of the galaxy (where our sun and most other stars in our galaxy are located), before the huge cloud of gasses making up the disk coalesced into individual stars.
Posted by The Discovery Center at 3:04 PM No comments:

The Perseid Meteor Shower has Returned

August 11 – 12 is the climax of the annual Perseid meteor shower, weather permitting of course. 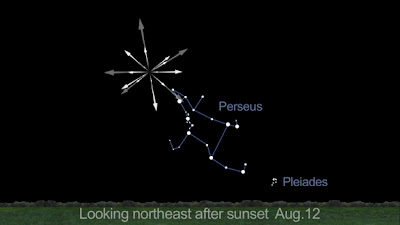 The best time for viewing is after midnight to the predawn hours when the numbers will be the highest.  Find  a spot away from a lot of ground lights and look to the northeast.  If there is a lot of ground light, look to the darkest part of the sky.   Like most meteor showers those with patience see the most. The meteors tend to come in batches out the constellation Perseus, hence the name. However, they can appear in any part of the sky but all their tails will point back to Perseus.  This year the moon will have minimal effect on viewing.  The Perseids occur every year as the Earth passes through a stream of dust particles and debris from the Comet Swift-Tuttle. These particles hit the earth’s atmosphere at speeds up to 140,000 mph and become heated to form bright streaks across the sky – shooting stars.  The shower is at its peak or climax when the earth passes through the middle of the tail debris.  For those willing to stay up later or get up extra early, there is an added treat as this meteor show has the most fireballs of all the meteor showers this year.  So get out a blanket, lay on your back and enjoy the show.  And don't worry if you miss the peak, the show this year lasts from July 17 - Aug 24th.    Picture credit: NASA/JPL-Caltech.
Posted by The Discovery Center at 6:47 PM No comments: