July 2013 Constellation of the Month – Hercules 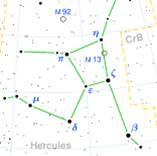 Last month's Constellation of the Month   Corona Borealis, the Northern Crown – is almost directly overhead about an hour after sunset.  Hercules is sandwiched between Corona, to its West and the  Summer Triangle a much larger grouping of three 1st-magniitude stars which we featured here on July 2012.  That blog post also explains the magnitude scale.

Although none of Hercules's stars is 1st or 2nd magnitude, it is readily  distinguishable by the "Keystone",  an asymmetrical rectangle of stars about the size of the crown of Corona Borealis.  The Keystone represents the body of the mythological hero Hercules.  His two arms extend from the two southern corners and his two legs extend northward.  His right foot is stepping on the head of Draco, the Dragon, which is a serpent-shaped circumpolar constellation that we'll feature in this blog next summer.

The constellation Hercules is known for several prominent Globular Clusters.  Globular clusters are very old spherical groupings of stars which pre-date the forming of stars in the disk of our Milky Way Galaxy.  Almost all the stars in our galaxy are in the disk, but globular clusters are scattered outside the disk.   These clusters are made up of 10,000 to several million stars.  The stars in each cluster were all formed around the same time, and they are held together in the globular shape by their joint gravitational attraction.

Along the western side of the Keystone is M13, considered by many as the finest example of a globular cluster in the northern sky.  Comprised of about 300,000 stars, it's about half the width of the full Moon, and it's easily visible with binoculars.  North of the Keystone is M92, the oldest known globular cluster.  At 14 billion years old, it's more than twice as old as our Sun (and Earth).  Hercules also has some interesting binary stars which are resolvable with a small telescope.
Posted by The Discovery Center at 9:34 AM