July 2014 Constellation of the Month – The Summer Triangle 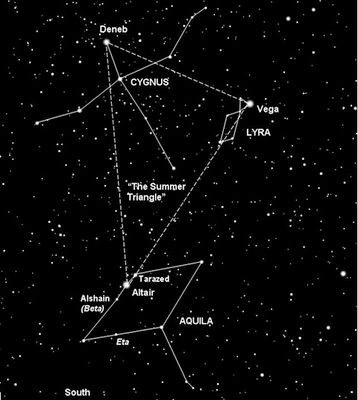 Vega is an important star, because it was used to define the zero point in the scale used to specify the apparent brightness of stars – the magnitude.  I say "apparent" brightness, because it describes how bright a star appears to us on earth.  A very bright star (one with a large "absolute" brightness) which is very far away can appear to us as less bright than a star of average brightness which is much closer to earth.  "Close" in astronomical terms, could be 50  trillion miles away.

Stars brighter than 1.5 magnitude are called 1st magnitude, from 1.5 – 2.5 are 2nd magnitude and so on.  The naked eye in Ridgefield can probably see no fainter  than 4th magnitude, due to light pollution. The other two stars in the Summer Triangle – Altair and Deneb – are magnitudes 0.77 and 1.2, respectively.  So they are also 1st magnitude stars.  By way of comparison, the stars in the Big Dipper are magnitude 2 stars.
Posted by The Discovery Center at 9:06 AM