Year of the Turtle 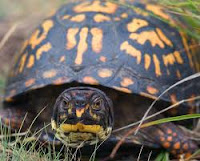 Why did the turtle cross the road? To get to the other side most likely! It is that time of year when female turtles venture from ponds and woodlands to find good nesting sites to lay their eggs. Unfortunately, they are often killed or injured by passing cars.
The Eastern Box Turtle pictured is distinguishable by its high domed shell with sunburst patterns of orange or yellow on a dark background. Box turtles are able to pull themselves completely into their "boxes" or shells, hence their name. Since they take about ten years to reach maturity and lay only a few eggs at a time, their numbers are heavily affected by loss and fragmentation of habitats, as well as road mortalities. They are currently classified as a species "of special concern" in Connecticut.
The Connecticut DEP has declared 2011 the Year of the Turtle to make people aware of the decline of these reptiles. Of the twelve species found in our state, seven are currently categorized as endangered, threatened, or of special concern.
Help a turtle across the road if you can safely do so, but do not relocate it. Be careful of snapping turtles as their powerful jaws are dangerous. Never keep a wild turtle as a pet as many species are protected by law. Instead, observe it in its natural surroundings and hope that it lives to reach 100 years old, as is possible with these long-lived creatures.
Posted by The Discovery Center at 2:09 PM