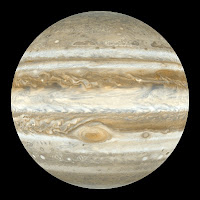 The largest planet in the solar system, Jupiter could hold more than 1,000 Earths. In the late summer, early autumn you can't miss it as it rises in the east shining brighter than any other object in the night sky (except the moon of course). It takes almost 12 Earth years for it to orbit the Sun but only 9 hours 56 minutes to spin around its axis. This fast rotation makes it bulge at the equator and flatten at the poles. It has 16 moons, rings and one big red spot. The Giant Red Spot is caused by winds spinning in opposite directions and has been observed for 300 years.

Only the Sun generates more radiation then Jupiter. This makes approaching it extremely dangerous. In August 2011, NASA will be launching a probe called Juno to explore it. To protect Juno's "brain from being fried" from such massive radiation, engineers added a unique protective shield around its sensitve electronics. This basically makes Juno into an flying armored tank.


Posted by The Discovery Center at 1:33 PM