Think Pancakes - It's Sugaring off time 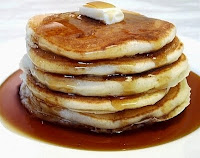 Sugaring off, or the production of maple syrup, has been an early spring activity for centuries. Native Americans gashed the trees, collected the sap in wooden troughs or bark bowls, let it partially freeze to enrich the sap and then boiled it down by sometimes dropping heated stones into it. At times, it would be tossed onto the snow to freeze into “wax sugar”. But boiling it down into sugar cakes made it easier to carry and store. For Native Americans and the colonists this and honey were their primary sweeteners. It wasn’t until the end of the 1800s that white sugar became abundantly affordable. Gashing trees is no longer done as it can kill a tree and the number of good sugar bushes (groups of good syrup producing trees) isn’t as plentiful anymore. Instead trees are tapped (drilled) with a spile inserted into the hole. Sap runs down the spile into buckets or it is funneled down tubing. Eventually it ends up in large reservoirs that are heated over evaporators. It takes 40 gallons of sap to evaporate down into one gallon of syrup. Sounds simple but good syrup production is a bit of an art. Weather determines when the sap begins to run and when the run ends. Freezing nights and warm days are the herald of sugaring off season. Maple trees of all varieties and the box elder can be tapped. But because its sap has a superior percentage of sucrose, the Sugar Maple is the “Jewel of the Sugar Bush”. (photo Allison S. 2010 - Radishes&Rubarb.blogspot.com) Originally posted on 2/15/11
Posted by The Discovery Center at 7:26 AM