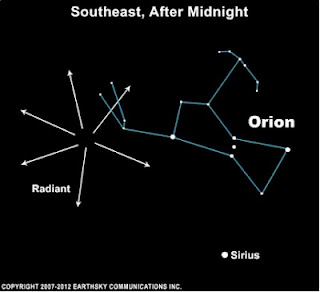 Halley's Comet provides October's annual Orionids meteor shower.  Even though the comet will not be visible again until 2061, it is still active.  The Earth crosses its orbit every October.  Like all comets it sheds debris as it gets nearer to the sun.  Some of this debris enters our atmosphere and vaporizes creating "shooting stars" or meteors.  Although it is not as dramatic a shower as the Leonids (November) or the Perseids (August), the Orionids are fairly constant in number.  The best viewing is this weekend between midnight on Saturday and dawn on Sunday.  Meteor showers are named for the portion of the sky that they radiate from.  In this case it is the constellation Orion which will be in the southeast.  However, the meteors are not restricted to that region and may appear anywhere in the sky.   As always, if you want to see the show, you have to find an area where there are little ground lights or obstructions.  You can use Sirius as a guide to the correct area to start looking.  It is the brightest star in the sky.  However, Jupiter will out shine it after midnight.  If viewing the shower in the early dawn hours, Venus will even out shine Jupiter.  Image credit:  Earth & Sky

Posted by The Discovery Center at 7:53 PM